Had a pretty good weekend.  Not sure what happened to the massive storms they predicted for yesterday, but what a let down!  Mike and I just walked downtown to check out the market, hit Timmies then a couple shops.  Today, we flew out to the Canadian Warplane Heritage Museum at the Hamilton Airport.  It’s always weird to land such a tiny plane on 10,000 foot runway!  We headed over to the museum and parked out front.  I put my nice new sun shield up:

While we were eating our yummy breakfast, we saw a bunch of kids point and smile, saying it’s Dusty!  Even some of the adults in the restaurant said the same thing.  I think that sun shield was the best purchase EVER!  Tee hee!

After brekkie, we toured around the museum.

Mike (after some persuasion) stuck his head through this air traffic controller stand….looking very perplexed and deep in thought:

Saw the awesome Lancaster, which I’m scheduled to fly in next month.  Looks like it’s getting some engine work done:

The Lanc is almost as awesome as this cool Dusty replica: 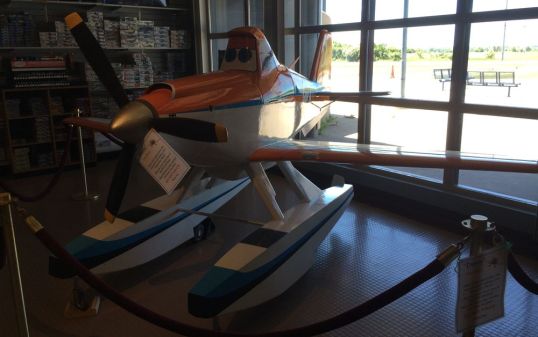 After touring the museum then hitting the gift shop, we headed back outside.  There was a really high end car show going on out on the apron, including Alfa Romeos and Lamborghini’s:

Back out to Vyctor to head home.

We had another decent flight earlier in the week too.  We flew all the way (nine minutes) to Welland Airport for our COPA and RAA meeting.  There was a great spread of food (BBQ and potluck):

Then we watched a great presentation by someone from NAV Canada on aviation weather.  He was excellent!  Totally worth the exhausting flight there and back, plus the heartbreak of having to leave Vyctor outside all night back in St. Catharines:

At least my charming new “accessory” kept him company: 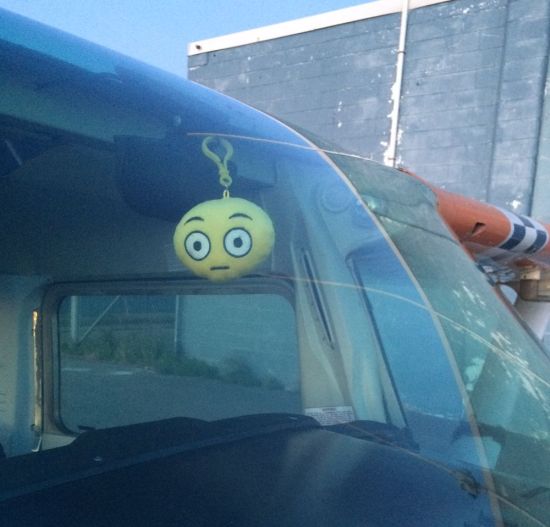 That was the same look I had on my face this morning when I looked at our jigsaw puzzle (which is on a puzzle mat and covered with a blanket), which was destroyed by two dorks:

Pinky has never been up on the table before either.  Ugh.

Today’s symptoms:  Felt pretty darn good today!  My energy was better than normal, which was great for our adventure today.