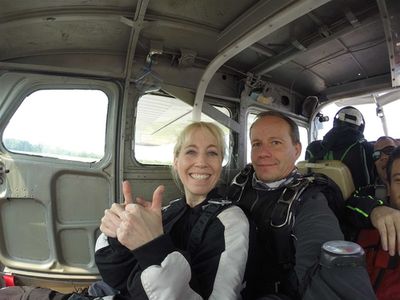 In my previous blog, I missed one of my favourite pics from my awesome skydiving experience on Friday. The ever awesome tandem master Péter and myself, soon before departure from the lovely aircraft.  And although I’ve only known him for an hour or so, there is Rob in the background being, what I would gather, Rob:

Spinning down to kiss the Earth:

I’m very strongly considering going for another jump. I would love to do the progressive free fall course and jump. However, I’m really nervous that my MS fatigue will kick in and I would be unable to complete the full five hour course in one day. I think I need to start having more good days than bad again, at least that way I could judge it better. The class is on Saturday, so my stupid body better smarten up and cooperate for a weekend. If it doesn’t end up happening, I will at least book another tandem.

I only had one disappointment with my skydiving experience. I got absolutely no physical rush from it.  The emotional high made up for it, though! Now don’t get me wrong, it was still an awesome experience and I will go again, but the rush would have made it a smidge better. I’m actually trying to remember the last time I had that physical  sensation. I think it was during the beginning months of my pilot training, and I’m sure it’s because I was so nervous. Up until I was in my early 20’s, I had terrible anxiety. I honestly don’t know how I made it though ten years of the Army! I would still love trying new and daring things, and loved the rush that kicked in after I finally convinced my body to Go! I was always so nervous, and I think that’s the main contributing factor to the physical rush, at least with myself. I would have given anything when I was younger to never be nervous or scared again – anything! Within a few years of my diagnosis of MS, my anxiety was almost gone and I rarely get nervous anymore. For the most part, I really love it. For example, I know years ago I could never have given my motivational talks in front of fairly large groups, but now it’s enjoyable. The downside is that I am now rush-less. I wonder if there is something out there I can do to cause it to return?  And was this caused by my own lengthy battle with anxiety, where I finally kicked its sorry arse, or is one of my lesions on the part of the brain that is involved with the rush sensation?

Today’s symptoms: It’s been much better than yesterday, where I crashed just after 2:00 and had to lay down for over an hour (unable to sleep, my bod just needed to rest).  I was able to trudge the 8 minute walk to downtown for an appointment this afternoon, but have been pretty spent since getting back.  Trying to keep smiling!