I rarely get them, fortunately, but I received a message from someone who was very excited about me signing up with his/her “adult” site.  Here’s how it went (and yes, I blurred the naughty pic): 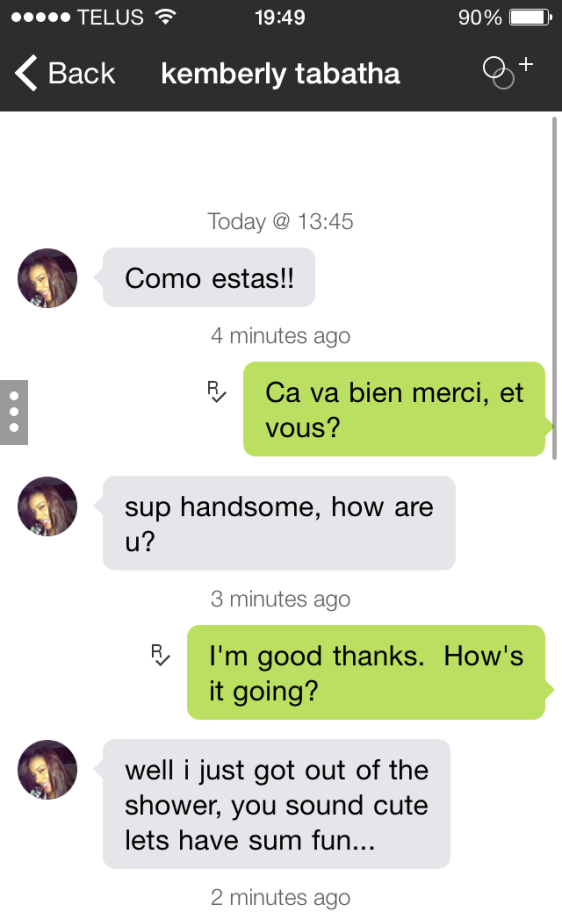 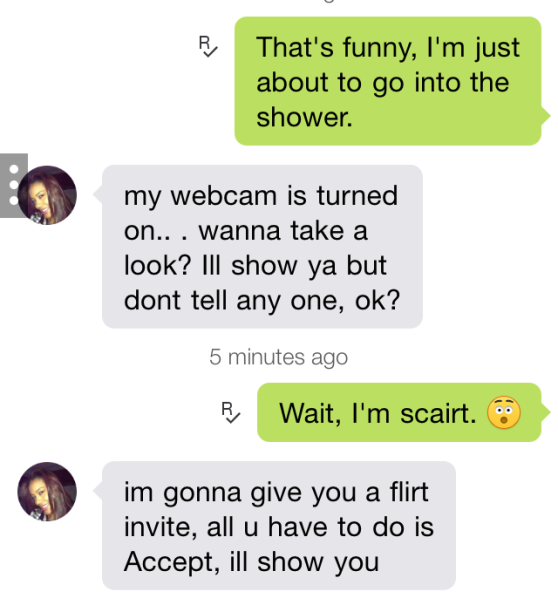 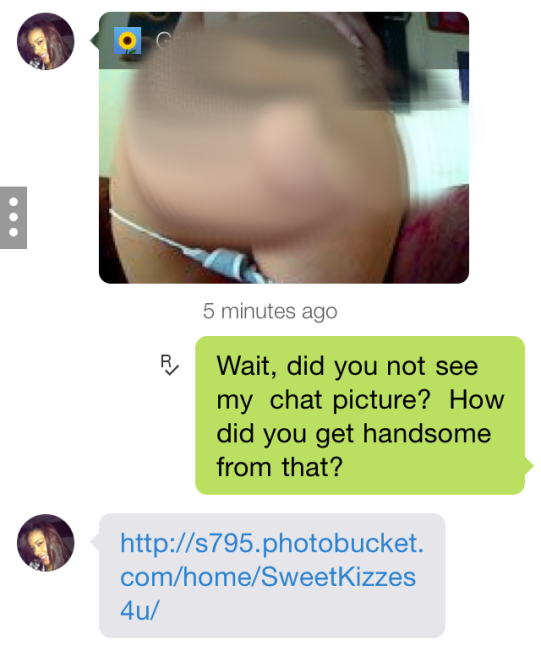 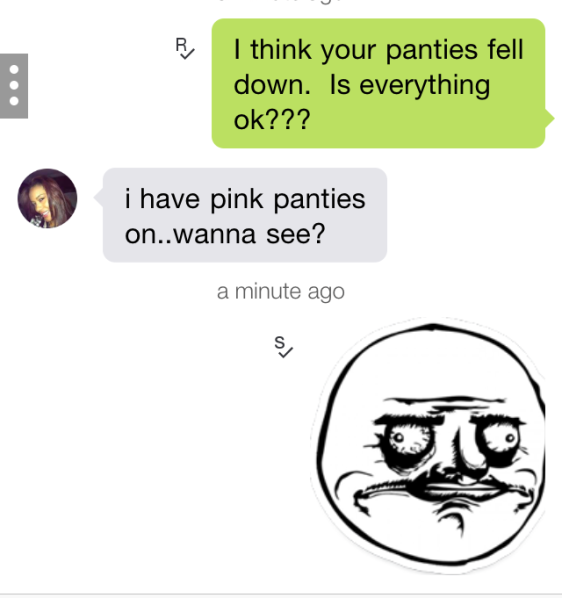 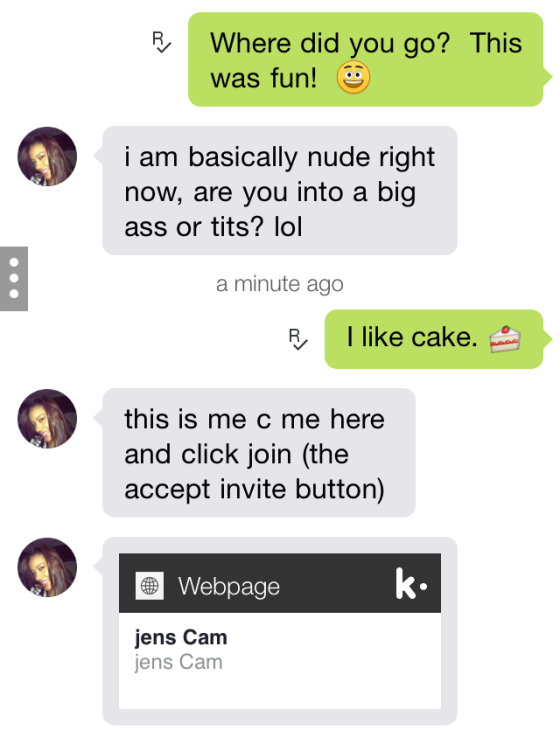 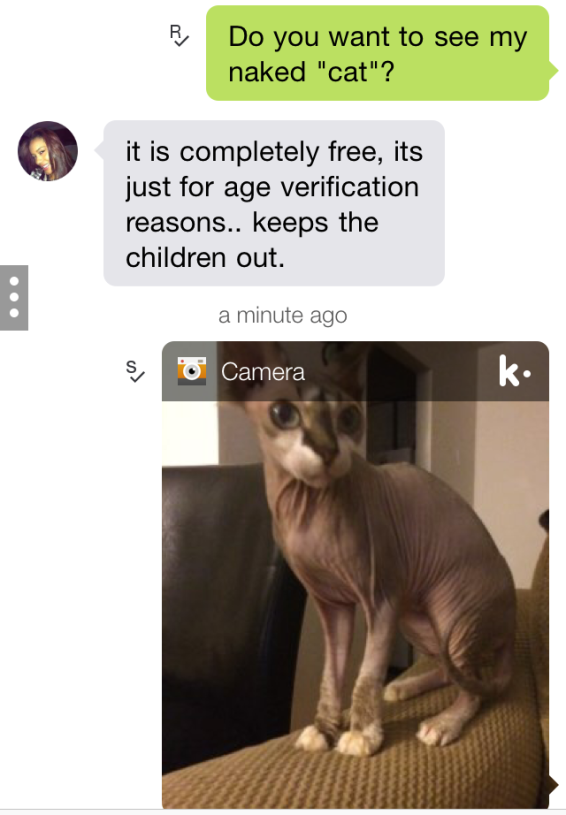 Yeah, that was fun!  And in case you’re wondering what my chat picture was, it was the same picture that made the Bad Cat 2019 calendar! 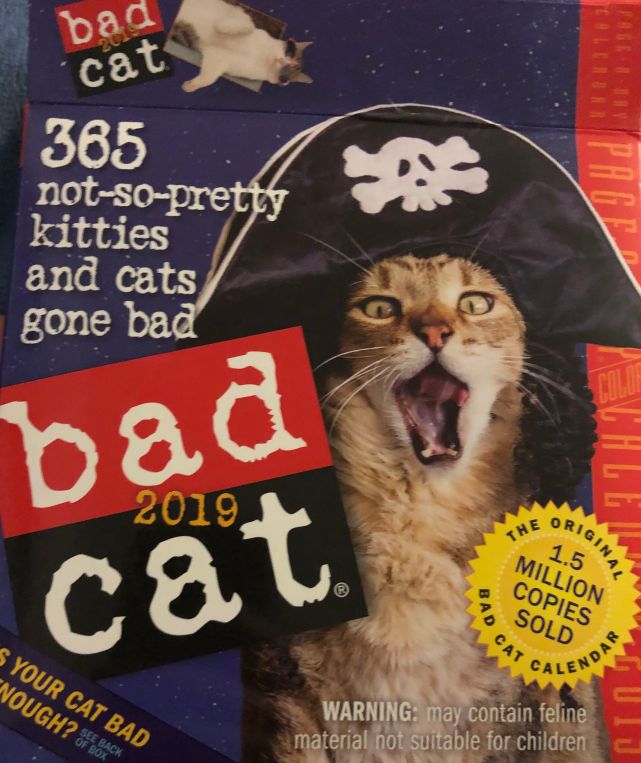 Yet again, one of my little freaks made it in this prestigious calendar – and is even on the back cover!  Way to go, Abby! 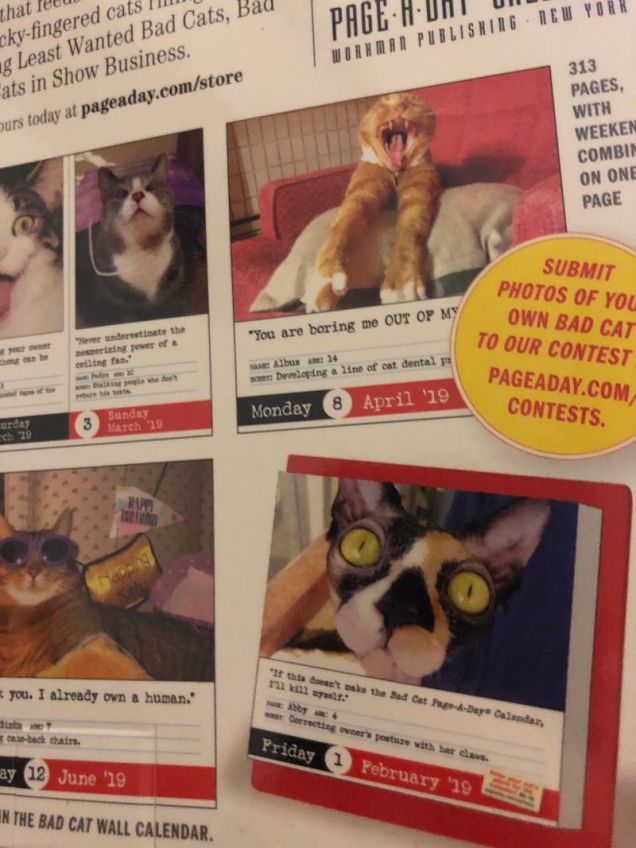 Tee hee.  I’m so proud of my youngest daughter, although she’s ten now (I’m not sure where they got four from): 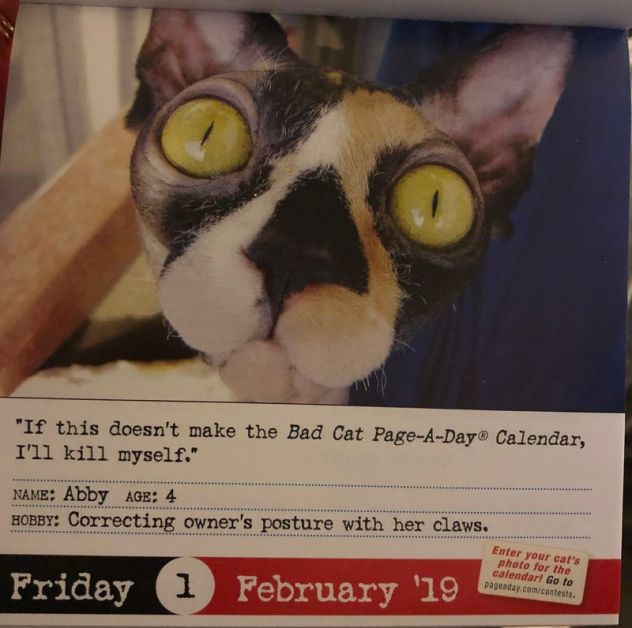 And yes, this was my “handsome” chat pic that prompted “kemberly tabatha” to try and lure  me to his/her fantasy land!

Today’s symptoms: I had a cold for almost two weeks, then ended up with a bladder infection.  It hit me so fast and hard – knocked me flat on my tush.  I forgot how much these infections take out of me.  I’m feeling a bit better every day, which is a huge relief.

Poor little Mya had to go to the vet the other day for a check up.  She’s twelve years old and seemingly very healthy, despite being so thin.  I’ve been feeding her wet food constantly throughout the day and tons of treats.  Still, she lost yet another half pound over the last year.  She’s down to 4.7 pounds.  It’s making me so nervous.  She has steadily lost weight for seven years, with this last year a bit more dramatic. 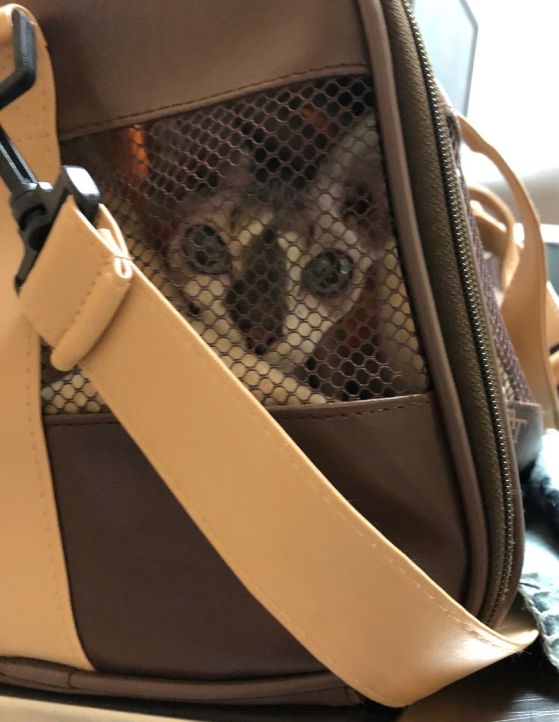 She was surprisingly very affectionate with me after we got home, despite being at the vet for around two hours.  She’s usually pretty ticked with me for a few days.  And she came close to topping out her cuteness factor when I woke up to this: 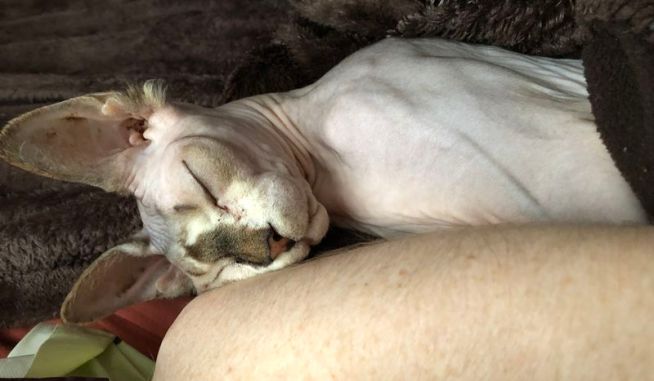 I’ve kinda been held up in the apartment for the last four days, with a bad bladder infection.  I’ve been going a little stir crazy, but fortunately my girls kept me well entertained and happy: 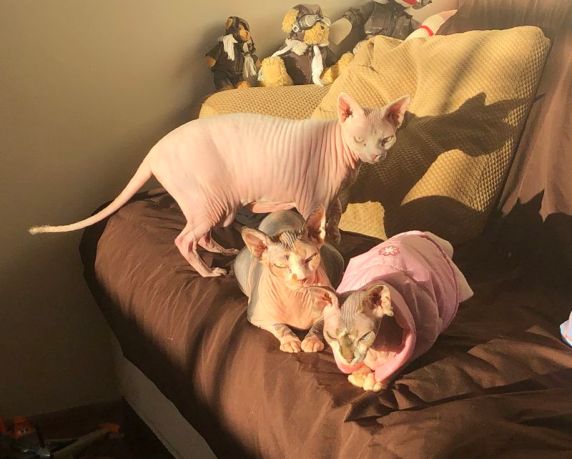 Pinky goes well with my socks: 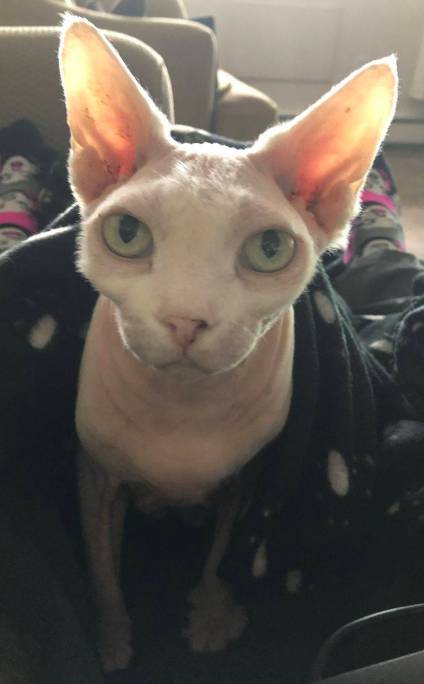 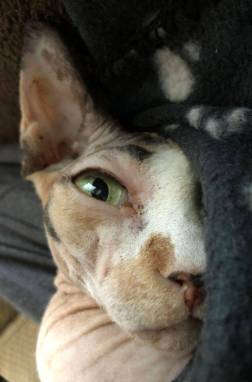 Feeling a bit better today and was able to get out for a couple hours before my energy splatted!  I’ve just been working on a presentation I have to give for work since being home and vegging with the girls. 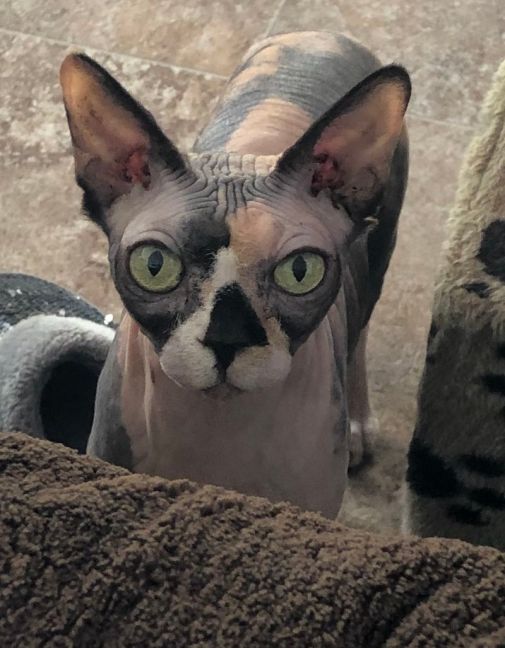 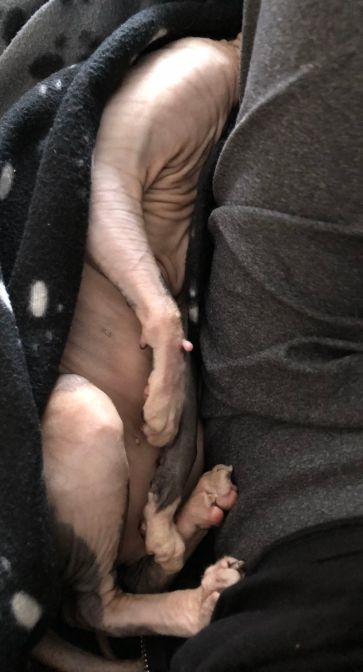 Notice the little growth on her front right paw?  I think I need to call Dr. Pimple Popper!

Paws (growths and all!) crossed that I feel better tomorrow so I can get back into the office.  I miss people!

Today’s symptoms: I’m in a fair bit of pain from the bladder infection.  I was worried this morning when I had pain in my lower back toward the sides.  Could be the infection in my kidneys.  I decided to mentally dispute this possibility and in my mind at least, although I think a bit physically too, I am feeling better than this morning.  Unfortunately these infections really wipe me out physically, because I already experience so much fatigue from the MS.  So it takes me quite a bit longer to recover.  My body is a bit of a jerk.

Well I blew it.  My New Year’s resolution was to try and be more “normal” this year.  Here’s the text conversation I just had with Mike, who’s quarantined to his place with a cold: 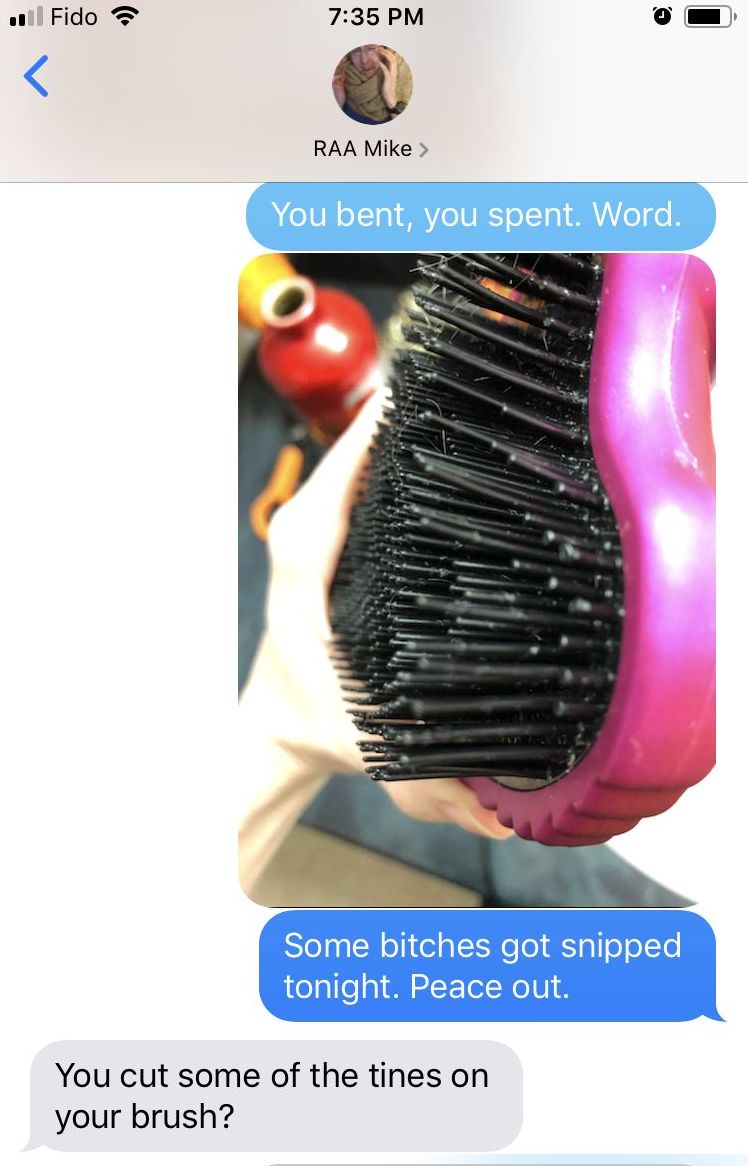 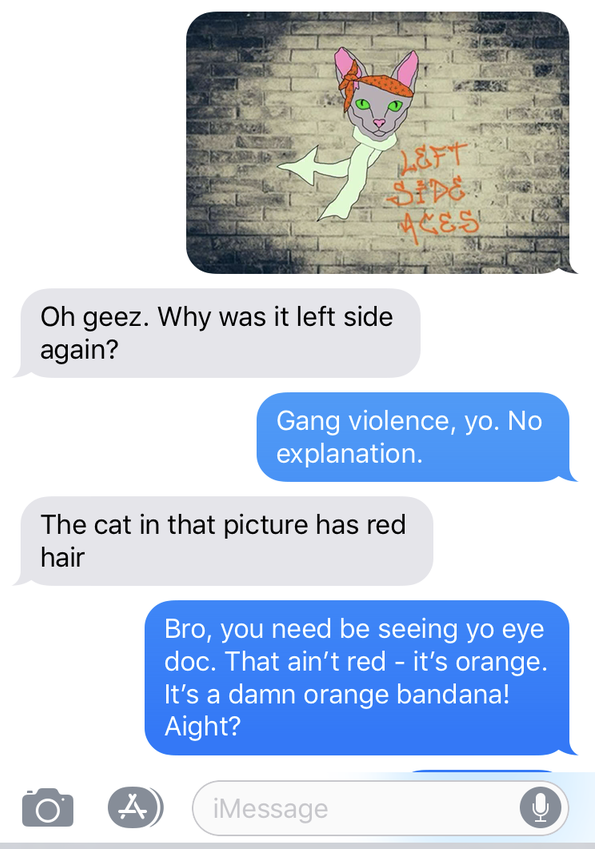 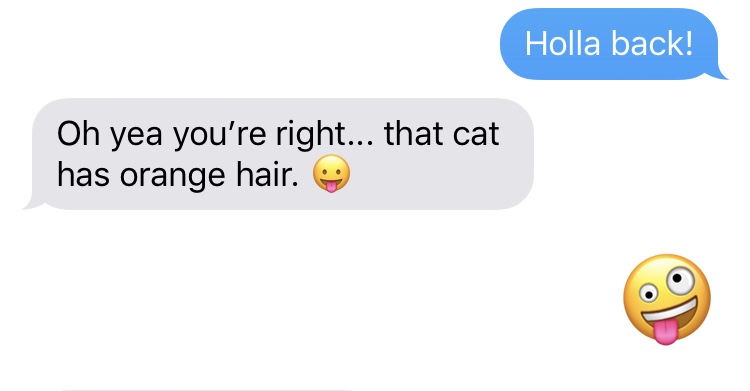 Today’s symptoms: Felt much better today than the last four or five.  Woot!  I was off so spent time with Jan.  Had energy during our visit and I didn’t need to take anything to perk me up.  I’d give anything to have these days more often!

I hope everyone had a wonderful Christmas and joyous New Year! My Christmas was awesome. Lil Jan came by after work on Christmas Eve and we promptly ordered a pizza when we got home. I love the frozen ones we get all the time, but dang! Good ol’ Pizza Hut is a bit of an upgrade! We split a medium and walked away from the table a tad stuffed. We watched about 20 episodes of Big Bang Theory that evening, as they had a marathon going on. Peanut joined us for a bit: 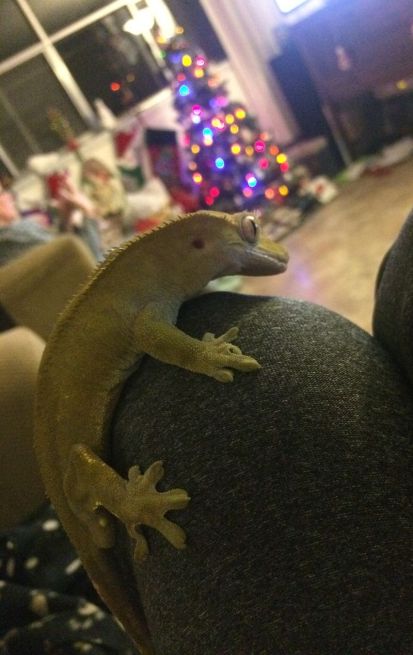 We had a blast opening up pressies in the morning. Abby was thrilled when she opened the grumpy carrot: 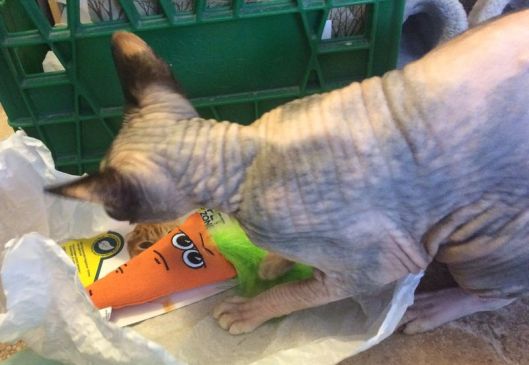 Everything was absolutely marvelous. I was sad to see Jan go home on Boxing Day.

The weather finally cooperated this past weekend and I was able to go for a quick flight. The ceiling was only at 2500′ around St. Catharines and lower everywhere else. Someone landed just before I took off and that was the only other plane I saw or heard. 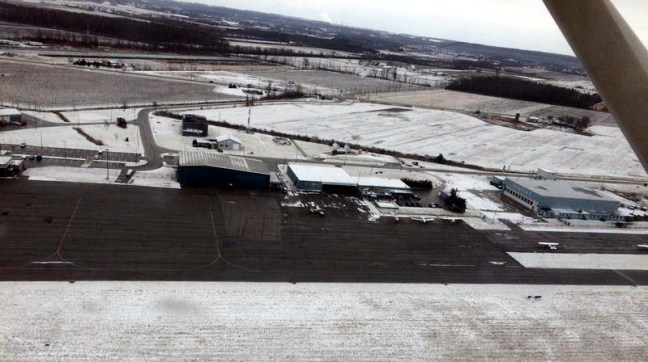 I think I’m going to start a new service. Aerial parking spot finder! Here’s Costco….I was surprised to see there were quite a few still available: 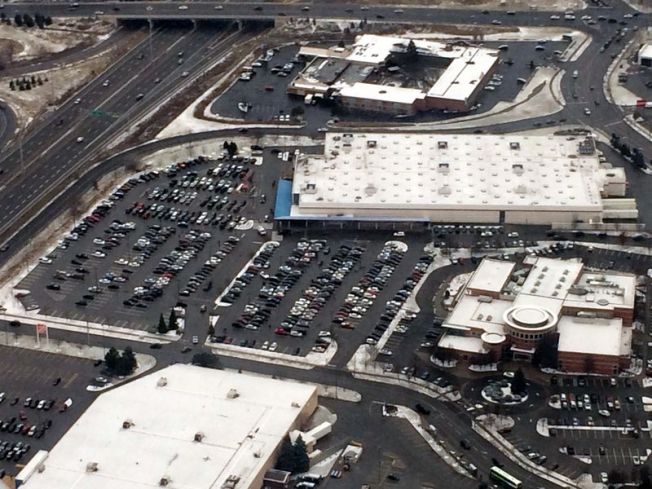 I only flew for about half an hour, since the weather was kinda limiting with where I could go. I mainly flew around downtown St. Catharines, admiring the scenery. Here’s the Burgoyne Bridge, blending in nicely with the snow: 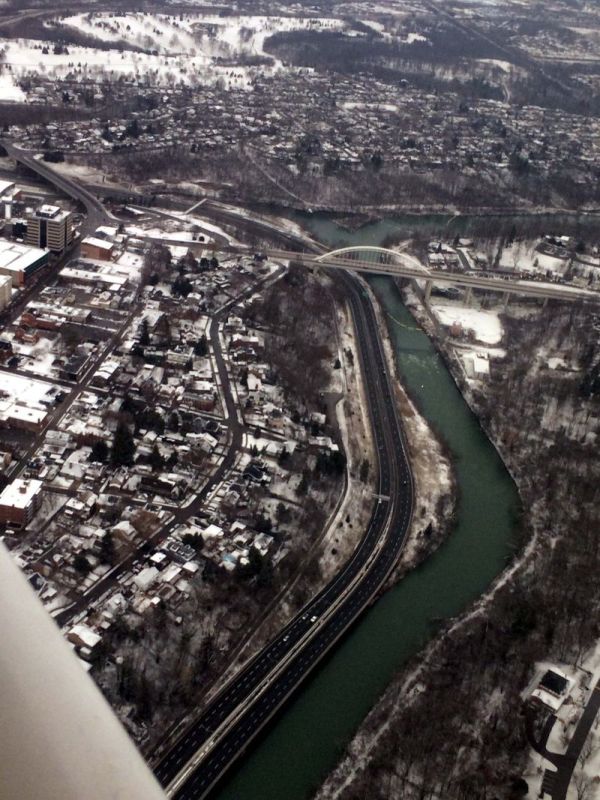 After circling over Niagara-On-The-Lake, I came back in to land and head home. I figured the kitties would all be snuggled on the couch, but instead I found a train of them on the heater behind the bed (except Boo):

Boo was on the bed, contemplating: 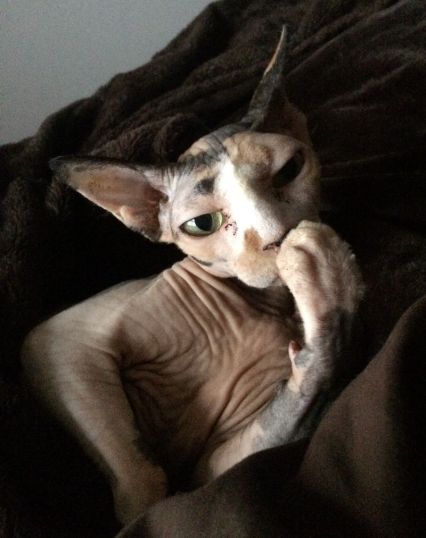 Today’s symptoms: I actually slept fairly well the last few nights.  I had a decent day today, just the average MS stuff (nerve pain and fatigue) plus my headache was a bit worse than normal.  Nothing to complain about though!