Thanks to all of my FaceBook peeps who wished me kind birthday wishes!  That really made my day!

My mother gave me a slipper.  The left foot only.  She said I get the other one for Christmas!  Tee hee.  What a dork.  We got together for a visit today.  I noticed in the Canadian Tire Flyer that the Roomba vacuum this is half price for $250.  I’ve wanted one since they first came out, but could never get through the guilt of spending money on something I really don’t need.  While at Walmart, we went over to their vacuum section and noticed a tag for the Shark version of the Roomba.  It was half price as well, for $200.  I managed to break through the guilt and purchase one (ordered online as they were out of stock).  I still feel guilty when I see the receipt, but I think I’m going to be quite happy with the purchase.  Hopefully it doesn’t scare the kitties!  I feel kinda bad that Dysie, my Dyson vacuum, won’t be used as much.  I actually find vacuuming a little therapeutic, and Dysie has been great with this over the last seven years.

My little mother reminded me to make sure I have a snow scraper in my car.  Good reminder and I’m passing it on!  I’ll have to go check if I have one in Lola Corolla.

I went for a nice solo flight last weekend.  I headed over the FirstOntario Performing Arts Centre (white roof on the right).  I’ll be heading there for a concert soon, which I’ll report on in an upcoming blog.

The one on the left is the Meridian Centre.  I’m lucky they are walk-able from my place.

This is heading back into St. Catharines, with the Burgoyne Bridge at the bottom: 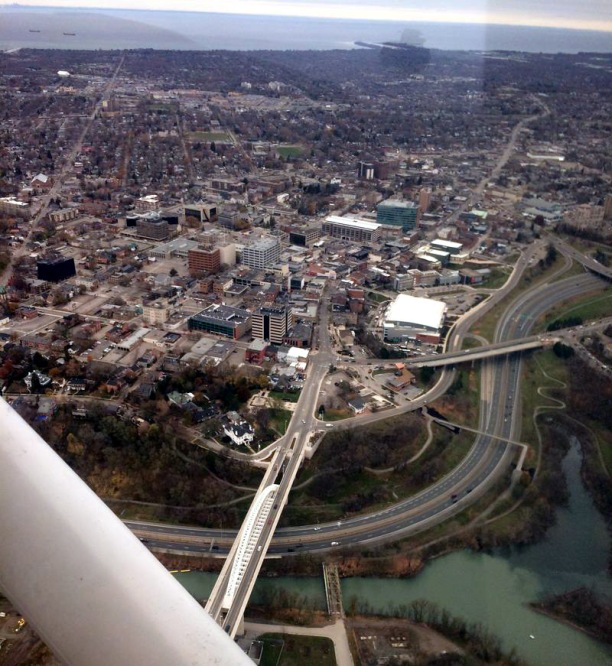 It was a really nice flight.  I couldn’t do any aerobatics because of a fairly low ceiling, which progressively dropped.

I was off today and after my awesome visit with Lil Jan, I did a bunch of cleaning with the critters.  Peanut had his tank cleaned, Zim as well, plus his sand changed.  The crickets were cleaned and their egg medium was put in the other tank.  I asked them all to pose for a pic in their new, clean home (not that I ever let it get that dirty!) and show how good it feels.  Little Peanut stepped up to the challenge:

He actually had a little rest on his sister, Pinky, while having his tank cleaned:

None of them having any issues with their two gecko brothers, but Pinky is the most docile with them.

Abby just chilled on the heater:

Today’s Symptoms:  It’s been a great week so far.  I’ve felt average consistently over the last few days.  I’m just experiencing more and more nerve pain in my hands.  Feels like I’m being stabbed to the bone with an ice pick.  Sure makes me know I’m alive!  Yikes!

Last weekend was great! On Saturday, Mike and I went to the Hand Made Market in Niagara Falls. We arrived around 11:00. I thought we had only wandered around for about an hour when Mike informed me it was after 2:00! I couldn’t believe we were there that long. We walked out of there with a few items, including some Christmas pressies.

Sunday, the weather was quite nice, albeit breezy. We headed to the airport and hopped in Vyctor for a flight to Kitchener for noms. We arrived just before noon and missed breakfast. It was our first time having lunch there and it was quite good! While nomming, we noticed Vyc’s brother taxied by. He’s the only other Cessna Aerobat I’ve ever seen in person.  We first noticed the newest addition to the Kitchener Waterloo Flying Club’s fleet last summer: 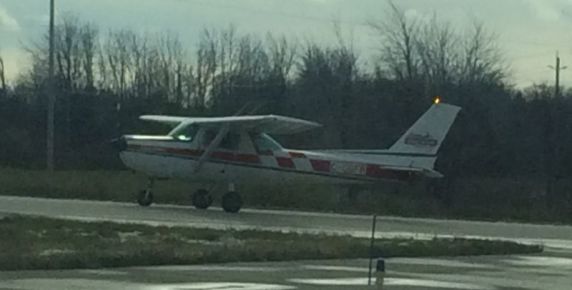 Heading back, we passed over the very busy Burlington IKEA:

Back home, we played Forza for a bit. Team Orange at it again. I can’t remember if that’s him or me on the roof:

Then it was time to wash the girls. I think Mya was mocking her sisters. She only needs a bath every month or two but her three sisters get more greasy than her so need a cleaning weekly: 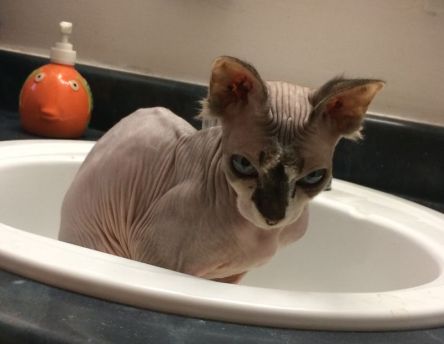 Boo was clearly unaware of her upcoming dunk in the sink (she hates baths):

I swear three of them were conspiring against me afterwards. I’m not sure why Pinky wasn’t joining in:

Little Peanut came out for a visit:

He went for a little ride on Pinky:

Actually, he really did go for a ride when Pinky suddenly jumped off the couch. He held on though!

Mya is trying to figure out why I picked her up Hair Care food. It was a free sample, ya little twit! 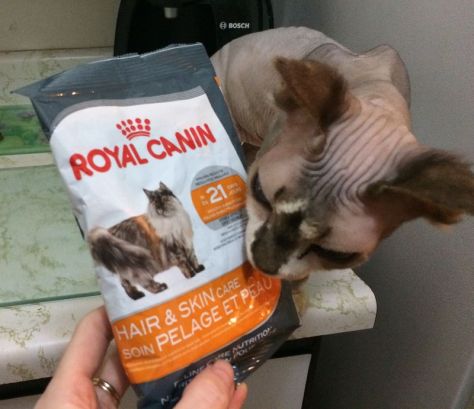 On Wednesday, I had the pleasure of speaking to some high school kids or Take Your Spawn To Work Day. I’ve presented three or four times in previous years, so I’m always happy to be asked back. A great group this year again! I do a compressed version of my motivational-type talk that I’ve had the pleasure of giving all over southern Ontario and out to Nova Scotia earlier this year. Good times!

Today’s symptoms. Had an average day. Minimal headache which is always nice, a fair bit of nerve pain but that’s just typical.  Energy level was my average, so blah.  It’s all good though!

The weather last weekend was quite good, so I was able to go up for a flight.  Donkay and I decided to head over Niagara-On-The-Lake.  Here is the main street through the town, with the clock tower on the right: 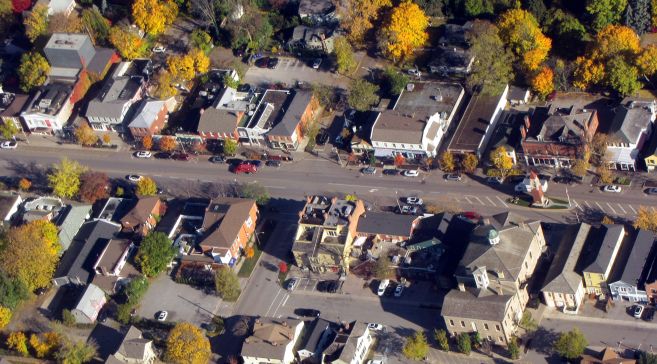 And the gazebo we stopped at during our Ghost tour a few weeks ago: 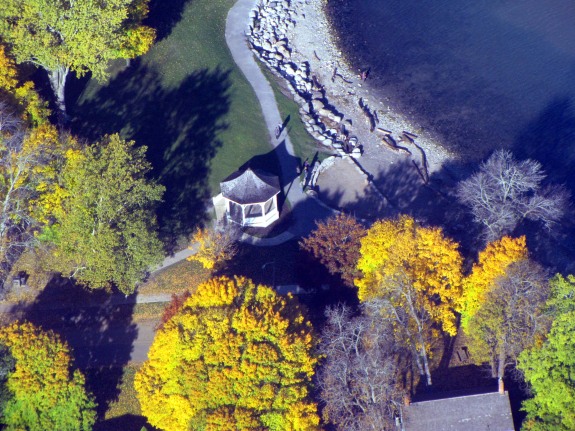 The Queenston Bridge wasn’t too busy at that time:

We ascended to 3500′ to join the Niagara Falls scenic circuit.  There were quite a few helicopters flying around on this great day.  The Falls looked spectacular, as usual, with a nice little rainbow on the US side:

And landing back at St. Catharines:

On Sunday, Mike and I went to visit my tiny mother.  Once back home, we walked downtown and wandered through the library.  We sat down for a bit and admired the Fall colours: 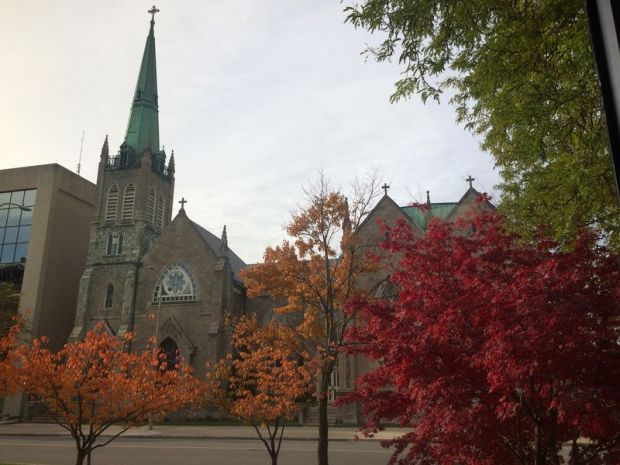 We hit Giant Tiger on the way home because we were craving cake.  They actually have nice little ones for $2.00.  Quite good too!

Yesterday, I drove to the Hamilton office to give an EAP presentation (Lunch and Learn).  I always arrive to these things quite early in case there are any technical difficulties.  Had a couple issues with the screen resolution and my computer occasionally disconnecting from the proxima, but I got out all the kinks well before everyone arrived.

I then presented to another group at the second office across the street.  Another really great group – very interactive.

Driving home wasn’t quite as pleasant as giving my presentations.  It look me half an hour to go less than a kilometer on the way to the main highway.  Just a wee bit of construction.  I sat with the car in park most of the time.  You know you’re going slow when your GPS does this: 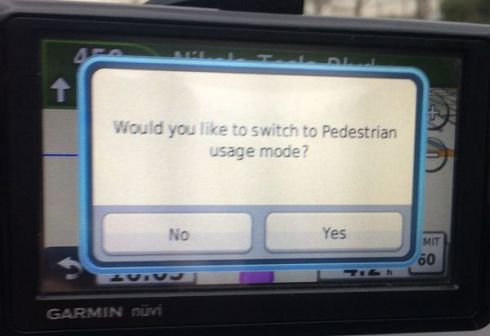 I finally made it home.  Actually, I was still smiling so much from the great day I had, the traffic issue didn’t bother me at all.  Others clearly weren’t having the same experience.  I saw many looks like this:

Today’s symptoms: I felt much better than I did earlier in the week, when I was dealing with a rather short-lived cold.  Still dealing with a worse than normal headache, but it’s getting better so shan’t complain!

My little mother had yet another flight with me recently.  I needed to pick up a case of aviation oil, so on Tuesday, we flew out to Brantford.  The weather was perfect with nice smooth air (so Jan didn’t glare at me).  There was some ground fog to the south:

We parked Vyctor then headed in to have breakfast at the restaurant at the airport, the Skyway Cafe.

Their food is always so good.  Once our bellies were full, one of the folks from the Flying Club drove us over to the Aircraft Spruce store:

We picked up our orders (one for myself and those of three of my peeps back in Niagara) and headed back to the plane.  It took a bit of maneuvering to get everything loaded nicely in the back, but we managed. 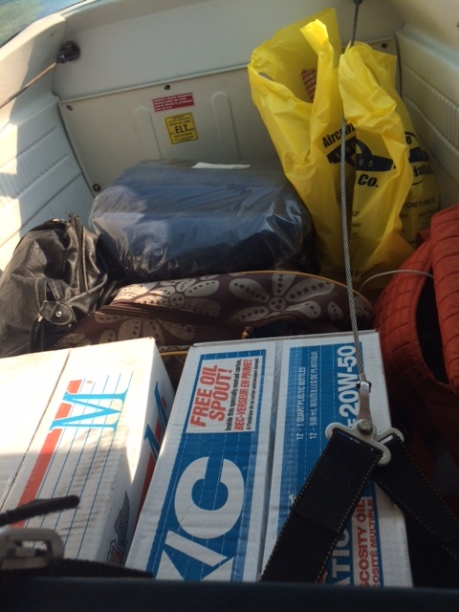 The flight home was nice, but a little bumpier than on the way there.  I don’t think Jan glared at me though.  She was too busy admiring the leaves in their Autumn glory:

Since we left fairly early that morning and were back at CYSN (Niagara District Airport) around noon, I still had a bit of energy left.  We decided to hit Zehrs on the way back to get our flu shots.  We didn’t realize this, but there is a higher dose of the flu shot for seniors, which you can only get from your doctor.  Good to know.

I have a feeling Mya was missing me that day.  When I got home, she was snuggling with my Dusty pillow (Mya knew I flew in Vyc that day):

She followed me around everywhere and even stood guard as I dried my hair: 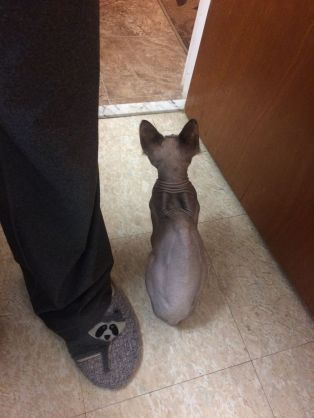 Eventually, my little guard jumped up on the counter and her three minions soon followed:

Yesterday was a very special day for one of them.  This is from a Petsmart email:

That’s right.  My youngest, little Abby, turned 10 on Halloween.  Here she is when I brought her home as a kitten: 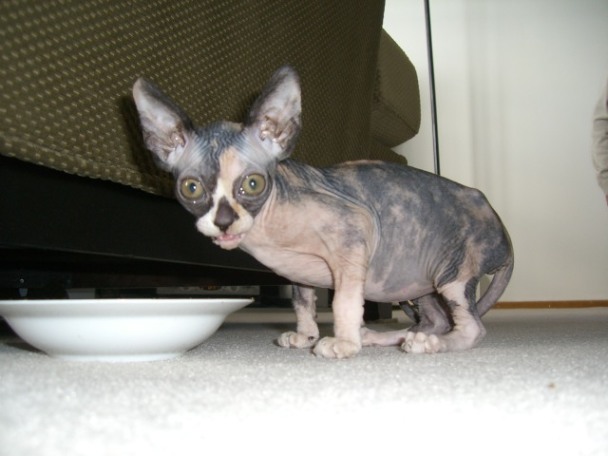 And something a little more recent:

She wasn’t supposed to make it to three, so it’s awesome she’s made it to ten!

Today’s symptoms: Felt decent, which was nice because it was my day off.  I got my final emissions test done on my car first thing in the morning.  For those of you who don’t know, there will be no more emissions tests starting in 2019.  Yea!  I’m having a lot of nerve pain in my hands, which was a tad annoying.  I managed to get a few things done at home and then just chilled for the rest of the day.