I had the honour of being the aerial photographer for the Rankin Cancer Run again this year.  The weather was so iffy with forecast mist and clouds, but it cleared just in time for the event.  It always chokes me up, flying over thousands of people (this year was over 13,000) running/walking for such an amazing cause.  They raised over $1,000,000 again this year!

Here is everyone taking position, ready to rock: 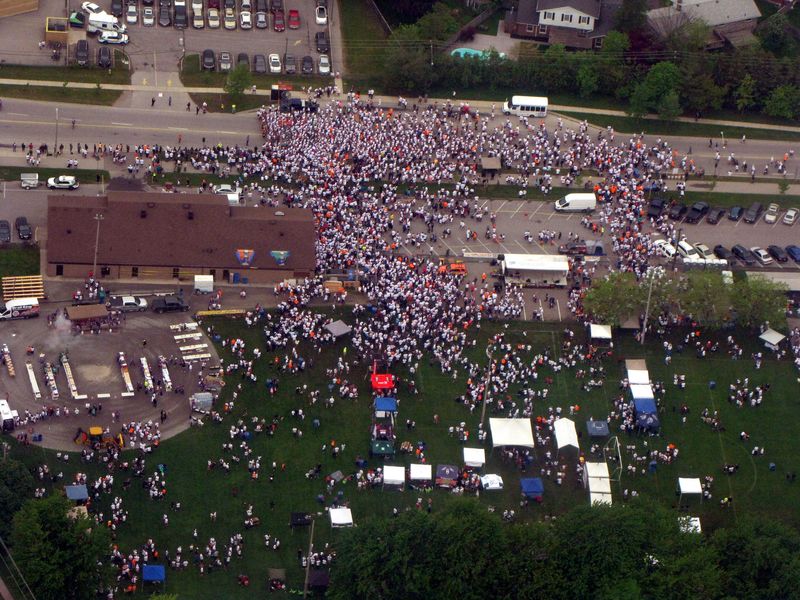 And off they go!

One of the organizers did something so awesome for me.  Not only did she drop off some shirts for me, but she made one for Donkay! 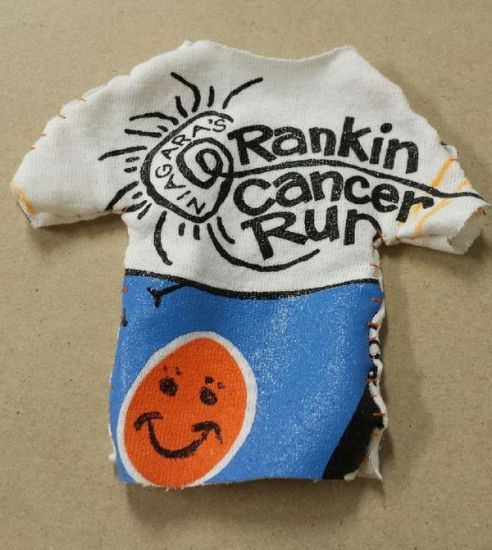 Could this be anymore adorable??? 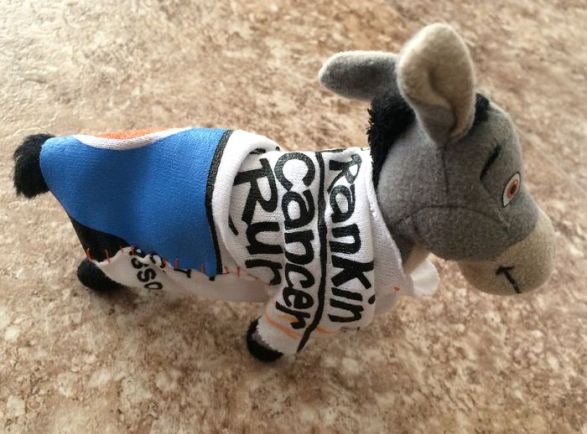 I can’t believe how perfectly it fit him, since she created it just off of Donkay pics from my blog.

The flight was fairly short as I just flew around for the event, without leaving the Niagara District Airport airspace, then came in for a landing.  I accidentally parked Vyctor next to the Snowbird plane that was there.  While there, I met up with a photographer named Kerry who took some excellent shots of Vyctor next to his new friend:

And one of Vyc and I:

You can check out her amazing work on her website: Weather and Sky Photography.  Thanks again Kerry!

A fellow RAA member posted this on his Facebook page the other day:

I agree with it, but decided to spruce up the pic a bit:

I realize I angled the blue lines on the wings in the wrong direction, but close enough!

After reading this, I’m sure you’re all looking for your kitty fix, so here you go: 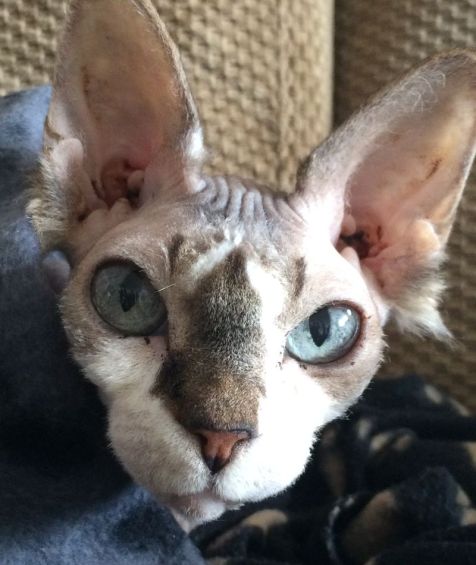 This is different – these two don’t much like each other:

You like their new LED high beams I just had installed? 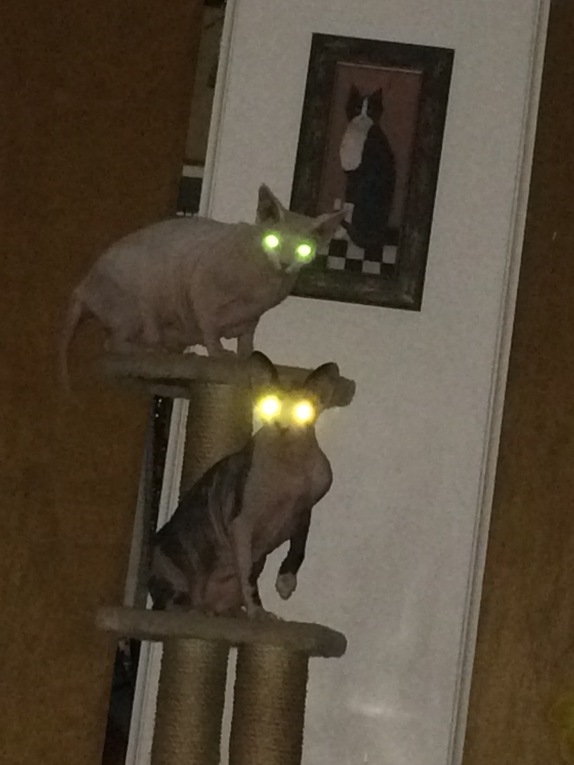 Today’s symptoms: Still feeling very drained and run down.  Too much emotional stuff going on right now and it’s really having an effect physically.  I’m working hard at pulling myself up though!

I didn’t end up flying this weekend but was up last weekend with a friend from work.  She won the flight from the Walk for MS pledge draw a couple years ago.  The weather was iffy, but cleared up as the morning went on.  The helicopters and gliders were out that morning as well:

We first flew over the glorious Niagara Falls, then back over to the St. Catharines airport for some aerobatics.  She was a great passenger – had no issues at all with any of the maneuvers.  We did pretty much everything I know how to do, minus combos.

Straight up toward the clouds for the hammerhead:

It was a great flight for both of us.

I mean, could we be anymore adorable?

The rest of the weekend was nice.  The kitties really enjoyed the sun.  I let them out on the balcony for about 20 minutes or so – don’t want them to get sunburned: 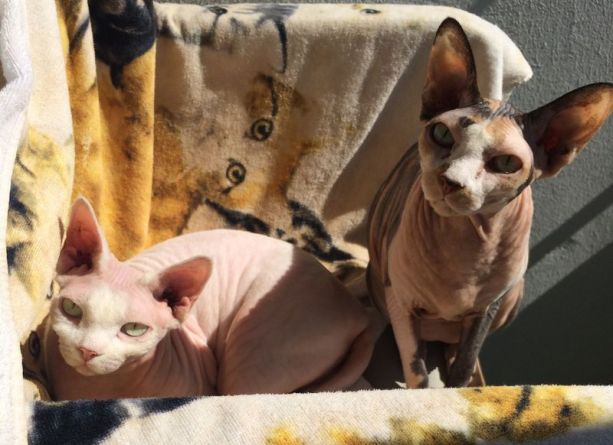 Pinky found another sunny spot once I dragged them all back inside: 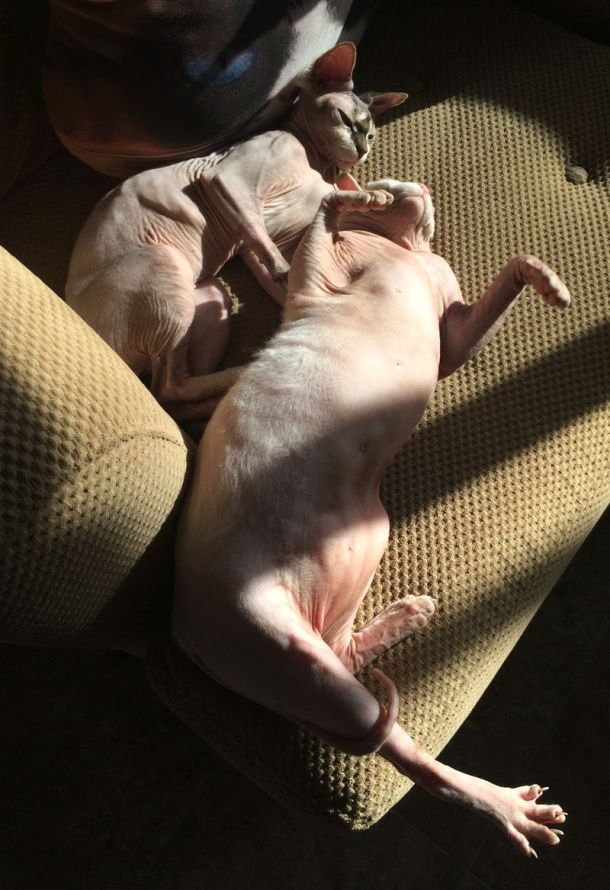 That is a big side of ham!

Mya climbed up onto the window sill and offered her paw in support of her friend:

I wasn’t up in the air this weekend, but someone else was.  I walked into my living room to see a pair of legs dangling outside my window: Looks like the new owners of the building decided to paint the balconies from white to dark brown.  He has quite the job ahead of him: 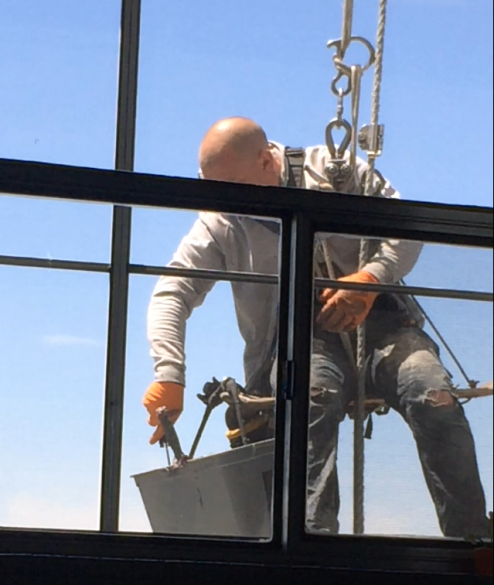 On Sunday, I met up with my Army buddy at the Casino.  We had just spent a couple hours there with him a few weeks ago.  I mostly watched him play, and did some people watching, which was entertaining.  Man, I can’t believe how much money some people drop while they’re there, especially when they play two machines at once!  I brought $55 and left with $77, so I can’t complain.  I played this machine for about 15 minutes, and cashed out as soon as I won: 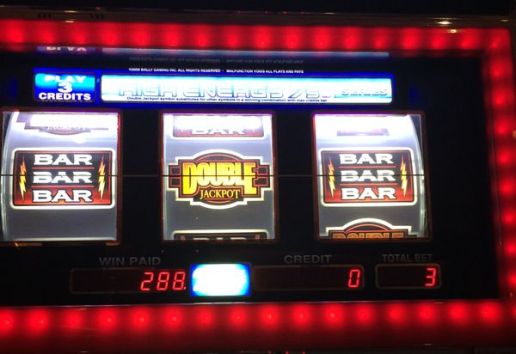 I’m so not hard core!

I just watched an episode of good ol’ Judge Judy, and found this image a little amusing:

He stood there like that for about a minute!  Judge Judy made this face then “kindly” asked him to close his mouth: 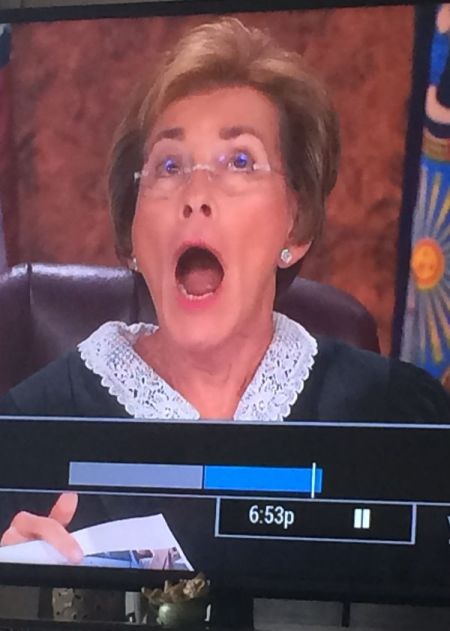 Mya then did her impression: 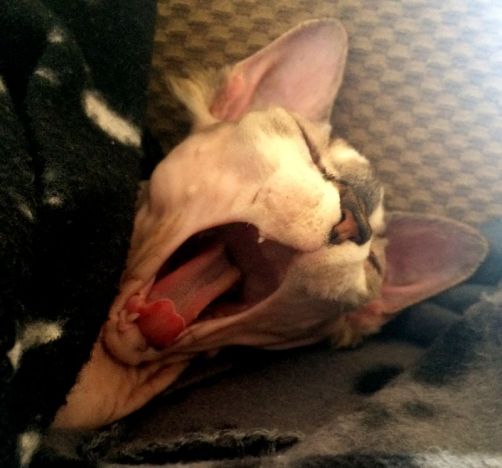 Yesterday, I had a neurologist appointment in Hamilton due to the ongoing symptoms I’ve been having, which started in January.  My left side, mainly my leg is weak, has decreased sensation, lots of shooting pains plus a weird warm and wet sensation.  A couple days ago I was standing there putting on my makeup and I thought I peed down my leg!  Apparently it was just one of the new and weird symptoms from this flare-up.  One thing about MS, you never know what’s going to happen next.  My neurologist is sending me for another MRI (I think this will be 14) to see if there are any changes to my cute, little brain.  He’s also a bit concerned that my lymphocytes have dropped again, which is caused by the MS med Gilenya.  Hopefully my next blood test shows they’re going back up.

Today’s symptoms: Been feeling pretty down and cruddy over the last week.  I don’t have much of an appetite and lost about six pounds.  Paws crossed things start to look up again soon.

It was iffy up until the morning of the Walk for MS this past Sunday, but I was able to fly over the event.  The Walk in Port Dalhousie started at 9:00.  I flew overhead for at least fifteen minutes, texting the organizer on the ground continuously to let me know when to start the little aerobatics show for the Walkers. (Not too many people outside in this pic – I’m not sure if attendance was down this year due to the weather):

After at least twenty minutes of flying in circles, waiting for my text to say “Start the show!”, I looked down and everyone had started the Walk.  This isn’t the first year this has happened.

Needless to say, I was very frustrated that it happened again.  I did a few maneuvers, but people would not likely have seen them while they were walking.  I don’t think there are too many other cities in Canada that get an air show before the event is supposed to start, so I’m a tad surprised that it does not seem to mean enough to them to announce the show and tell everyone to look to the skies.  Bummer.  I have to think if I want to do the fly over during future Walks.  I will continue to do the fund raising, since that is the most important aspect, but the fly-over portion leaves me feeling a little bitter and frustrated when it ends up like it did again this year.  And aviation fuel isn’t exactly cheap!  I’m still VERY happy and touched with all of the amazing people who supported me this year!  This weekend I will do my final tally to see how much I raised, plus do the draw for the flight!

Due to the insane amount of rain over the last week, the flooding in Niagara was very clear:

At least we got to go for a flight that day – Mike came with me this year.  As always, Donkay was there too:

Coming in for a landing:

For the rest of the day, we chilled with the kids and watched some TV.   Here’s Boo booping Mya on the head: 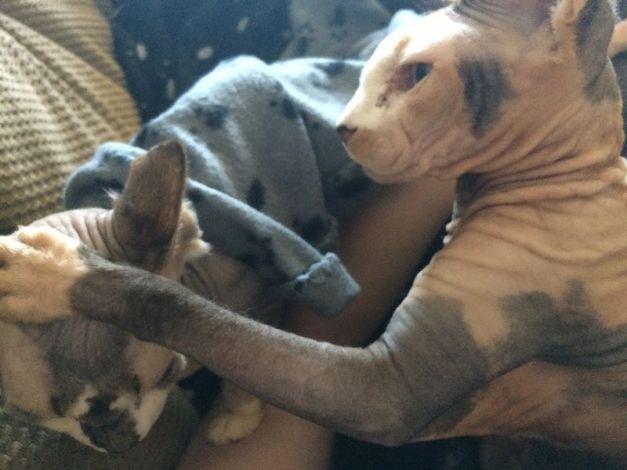 This is clearly a very strong bookshelf….get off of there, Pinky!

When Mike was leaving that evening, I (for some unknown reason), started throwing gang signs at him.  Then I went to say South Side, but it came out Left Side.  That’s when the weird and abnormal wheels started turning in my blonde, little brain.  After he left, everything came together in about thirty minutes.  I created a gang called Left Side Aces.  I then drew the gang symbol – first just a pencil sketch, then I transferred it to Photoshop to tweak and colour.  Here is the end result: 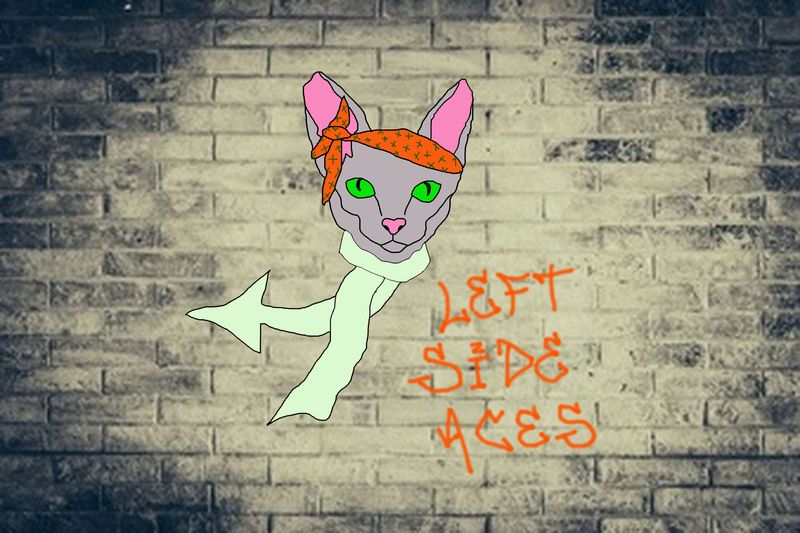 All the details just flowed (which is pretty disturbing!)  I even created the organizational chart.  As the creator of this gang, I am the top member, known as the Kingpaw.  My second officer is the Undermew, and below that rank are the Paw Soldiers: 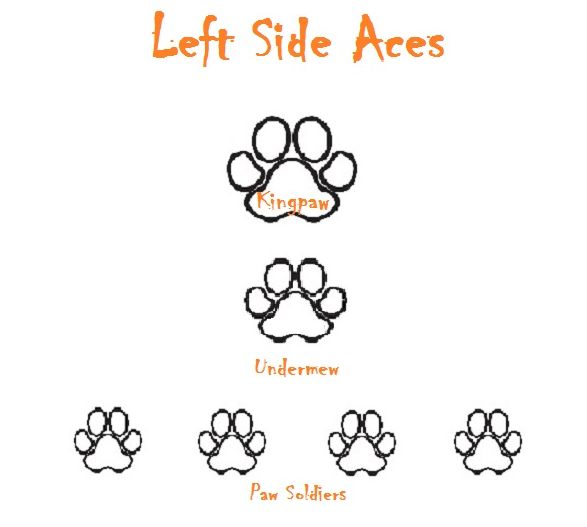 I told Mike he could be the Undermew, but as with most gangs, he would have to be beaten or jumped in.  That happened on Monday:

I asked my mother if she wanted to join and I would forgo the ass whooping.  I would also create a new rank for her called the Grandmewther.  She graciously declined.  I haven’t quite figured out the goal of the LSA yet.  We could steal kibble from the rich and give to the poor?  Hmmmm…….  (and yes, I know I’m weird!  It’s fun though and keeps me positive!)

Today’s symptoms: Had a couple pretty cruddy days.  Yesterday, I had six people at work tell me I looked very tired and not well.  I was a bit better today because I actually slept last night.  Dealing with some stressful situations right now (they all seemed to hit at once!) so that always takes a toll on me physically.  Things will get better though!

What’s up with this crappola weather?  It better not be like this for the Walk for MS on Sunday!  I wasn’t able to fly over last year because of the weather.  Enough of this silliness!  On a plus note, my pledges are coming along nicely….thanks to you contributors!  I have a bunch of cash pledges that I still need to add onto my participation site here:  http://mssoc.convio.net/site/TR/Walk/OntarioDivision?px=1375843&pg=personal&fr_id=5499

My wonderful daughters are all hopeful I reach my goal.  Just look at their hopeful little faces!

Please help our mommy support this great cause!  Look, even Peanut is hopeful: 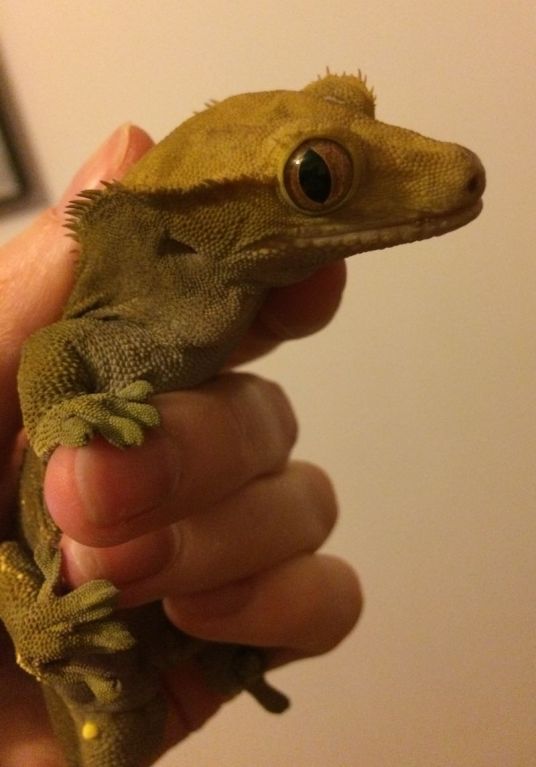 I was possibly going to do a flight today, but as the last few days, the weather has SUCKED!  So, instead I had the pleasure of visiting with my little mother.  She came by and we went to Timmies then did some shopping.  I decided to buy a new mat to cover the cable cords going across my hall, but it turned out to be a little too short.  The backing of my old one is kinda crumbling.  I was Lizzy Homemaker today and sewed on a slip-free backing to the mat.  I figured it would take me a couple hours but it was only about 45 minutes:

Just look at that quality work!  I even sewed a little grey cat onto the front:

I also did something today that I feel a little guilty about (because I don’t like to buy myself things, except for aviation fuel!)  I ordered a foot operated can crusher from Amazon.ca: 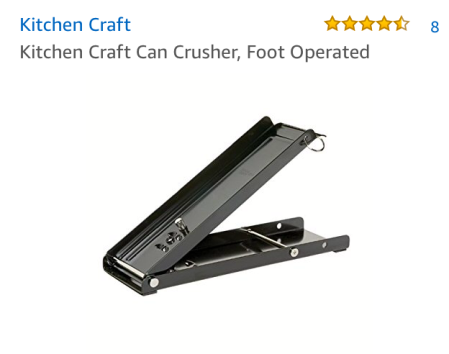 I almost broke my foot (mainly because I was just wearing a flimsy slipper) while trying to flatten a soup can today for recycling.  Abby’s thrilled about my new purchase, as seen here:

My life will soon be complete!

Speaking of complete, I would really love to be able to completely make my bed one of these days.  There’s usually a cat or four in it, blocking my progress: 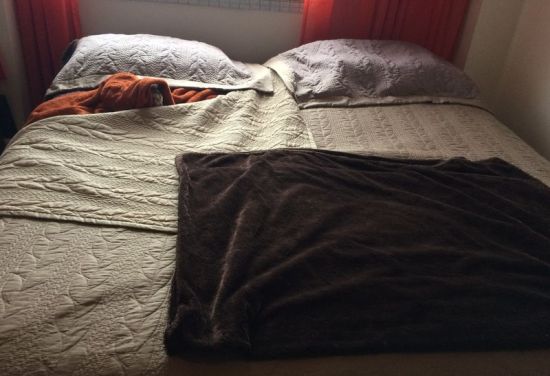 Boo was the culprit this morning.  She’s such a twit.  At least she looks stunning wearing a shrimp on her head: 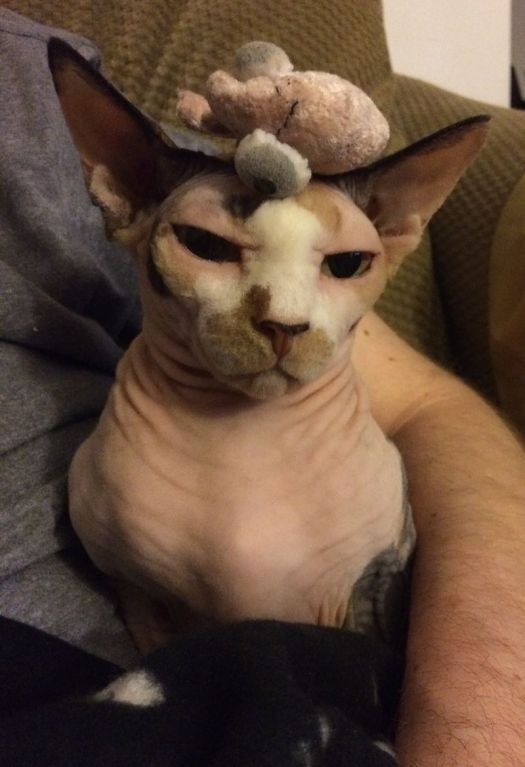 Today’s symptoms:  Felt pretty gosh darn good today.  I didn’t start to crash until after 6:00, which is pretty awesome.  Had more stiffness and spasms in my left leg, but I’m sure that’s just the continuation of the flare-up I’ve been experiencing the last few months.