I decided to get sick over the last couple of weeks.  You know, just for something to do.  I’ve never had a flu or cold take so long to peak.  It gradually became worse over a week, then finally hit maximum sickage on about day eight.  By day ten, I decided I shouldn’t mess around since my immune system is compromised from my MS med, so I went to the clinic.  Mike joined me and we were the second ones there once they opened.  The doctor gave me some antibiotics, nasal sprays and sent me on my merry way.  The severity of the sinus pain I was experiencing was certainly in the top five I’ve had.  Meds are doing the trick and I’m on the mend.  At least I had lots of great company while recovering: 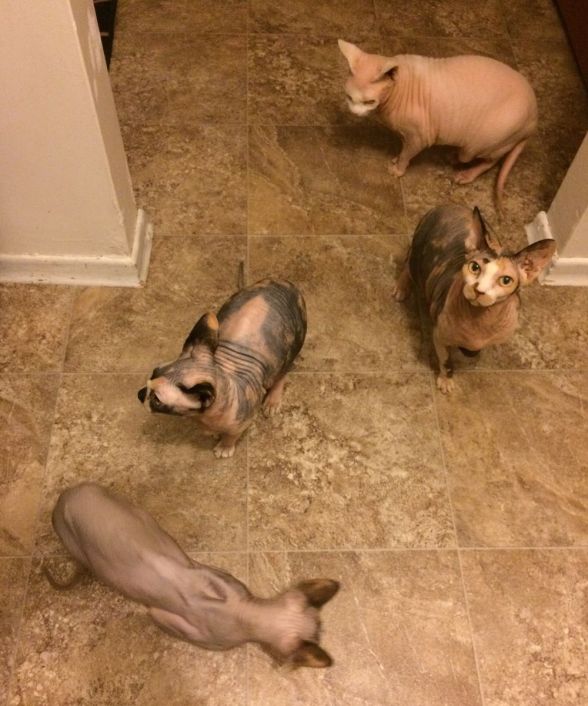 Little Peanut was all smiles, as usual: 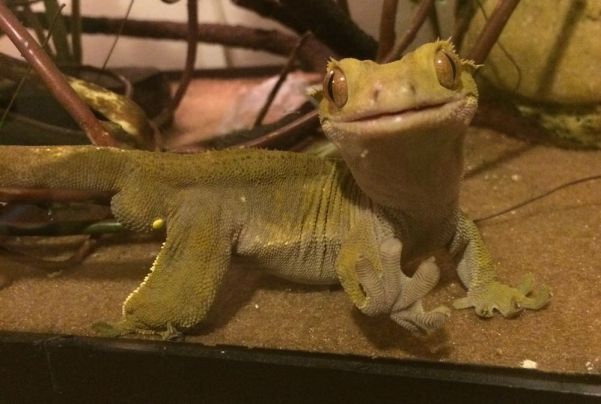 We played a few games, such as ring toss: 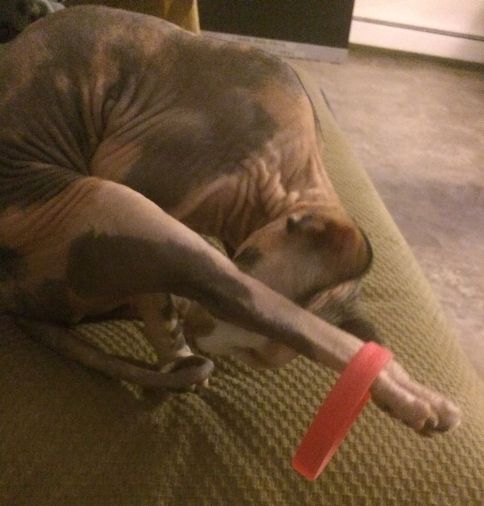 Of course, Pinky was her usual, bloated, blobby and adorable self:

Poor sheep never had a chance.

My little mother came over one day last week.  While I was bidding her farewell in the parking lot, I became very concerned when I saw this tiny shoe: 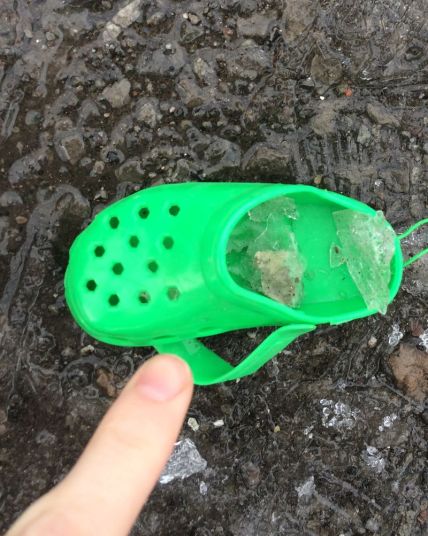 I ran after her car yelling “Mother, oh tiny mother of mine!  I do believe you may have lost one of your minuscule shoes!  Oh the humanity!!!!”  After calling me a few choice names, she told me that was not her shoe and drove home.

I was going through some old pictures and found this nice one of my last furry cat, Beau, and her naked little friend Mya:

I can’t believe how fuzzy Mya’s tail used to be!  I guess we all lose hair when we get older. At least she didn’t lose her cuteness and manners.  Oh wait.  I put a plate on the floor last night after nomming a brownie, and Miss Manners decided to walk over it three times:

Today’s symptoms:  Feeling much better.  Still have a pretty bad sinus headache but much of the congestion and wheezing has bid my bod adieu!  Fatigue is a bit worse than usual but I’m sure that’s just from the infection.  All is well in the world.

Due to my insomnia, I typically have to take a sleeping pill to get even a few hours of sleep at night.  My doctor put me on a med that I was on a few years ago, rather than my usual Sublinox (sublingual slumber-land pill).  I only took half and wasn’t sure how long it would take to wipe me out.  Apparently, it hit before I thought it was going to and my goodnight message to Mike wasn’t quite as clear as I hoped: 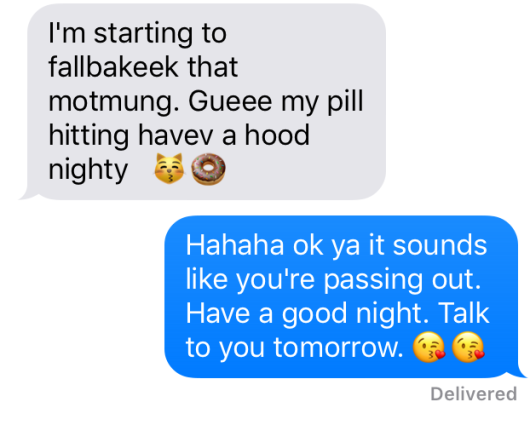 Tee hee….translate that bad boy!  I think I was trying to say “I’m starting to fall asleep……something, something….Guess my pill is hitting.  Have a good night!”

I was feeling good this morning and the weather was in our favour, so we were good to go for a flight.  His friend lives fairly close to the Brantford Airport, so he set up a meeting with him this morning.  Poor dude had to drive while we had the pleasure of flying.  This was a neat site before we flew into Hamilton airspace:

I asked Mike to take pictures of the adorable planes at the Hamilton Airport: 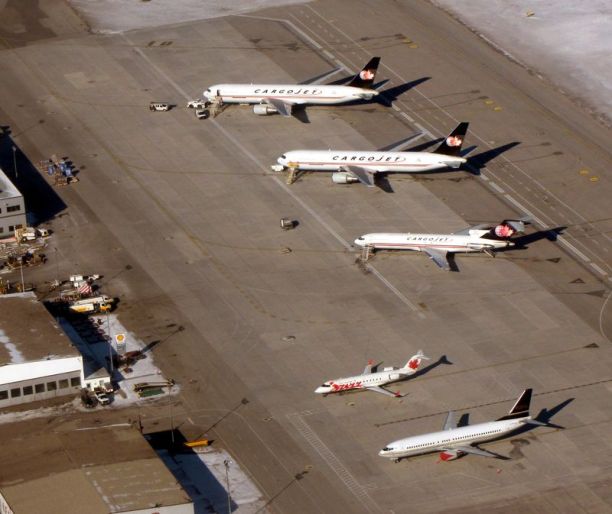 I love how tiny that one Jazz plane looks.

As usual, I brought the best copilot ever with us…good ol’ Donkay: 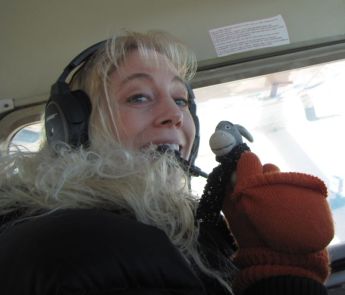 We had quite a bit of a headwind, so it took us over 45 to get to Brantford.  We landed just as his friend arrived:

It was a really nice visit.  Good noms and good company.  And great view of little Vyctor: 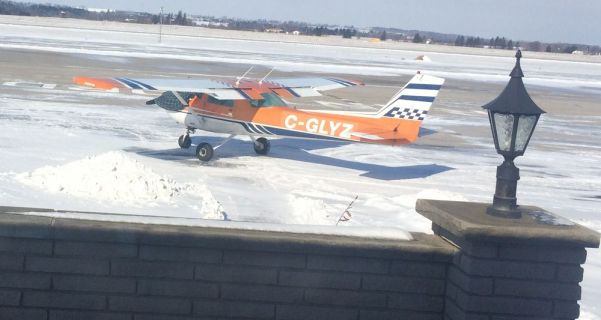 I have to admit, almost every meal we’ve ever had at an airport restaurant has been fantastic.  Ham and cheese egg white omelette…yum:

My awesome airplane mechanic asked if I could pick up his order from Aircraft Spruce, which is at the Brantford Airport.  It was a pretty big battery…good to know if mine died, I’d have a spare for the trip home:

The flight home was nice….we had quite the tailwind so it took us about half the time to get home as it did to get there.  Whenever I land, I always try to park right on the cross of the parking spot at the airport.  So close again – even Donkay came over to check it out:

After the airport, we made a quick stop at Pet Smart and the Fairview Mall.  I noticed a plane there and realized I just wasn’t done with airplanes yet:

Donald or Daffy or Mickey…whoever that was – thrilled to have me as a copilot!  Right Abby? 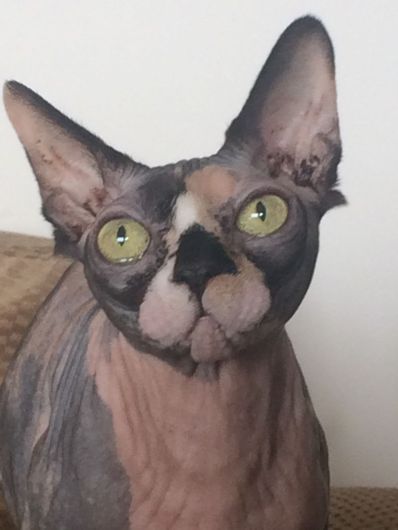 Today’s symptoms: Felt quite good – again!  Wow, this is awesome!  Tomorrow shall be good too – I command thou, fine, adorable body of mine!

I took up a retired co-worker today.  We were hoping to fly yesterday but the weather pooped out on us.  Fortunately, woke up to better conditions today.  Sweet!  We met at the airport for around 9:30.  We first went up over the Falls:

We didn’t see or hear any other planes or the helicopters while we were buzzing around at 3600′.  Guess it was too nippy for people.

She seemed to be enjoying the flight, so we headed North to Niagara-On-The-Lake.  She was feeling even more adventurous so we flew west to the St. Catharines Airport for some aerobatics.  Still at a bit over 3500′, we started off with a loop.  I have never had a passenger laugh so much during a maneuver!  It was priceless:

She was totally hardcore and had no issues with doing a bunch more stunts.  We did an aileron roll, snap roll, hammer head….. 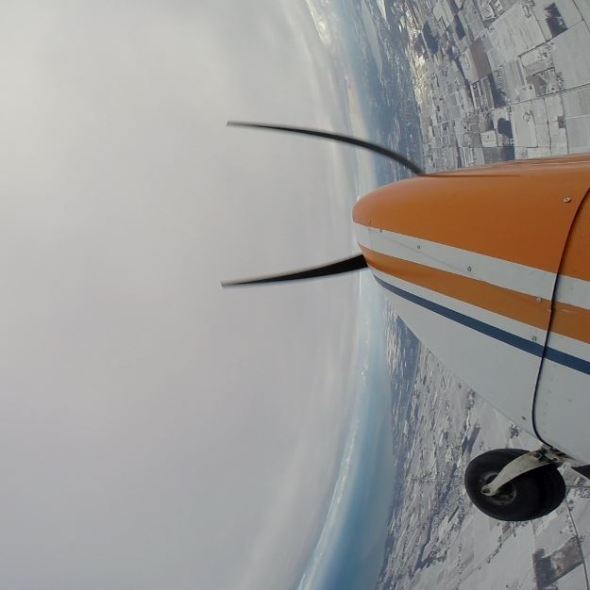 ….and finished off with a spin, straight down: 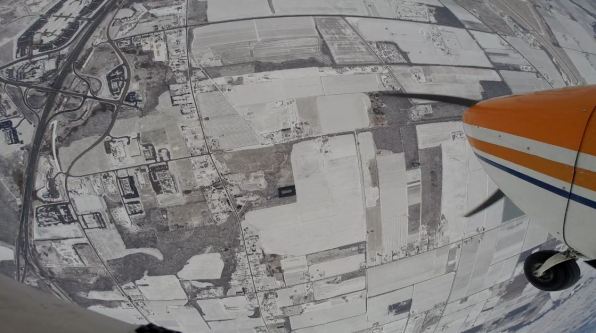 She laughed and screamed through everything – it was music to my ears!  I love nothing better than hearing my passenger having an amazing experience!  We flew for almost an hour, then came down for a nice gentle landing.  The flight was a blast for both of us!

Today’s symptoms: Had another good day!  Slept fairly well last night, which always helps.  I was quite drained in the afternoon, but always get pooped after a flight (especially aerobatics!)  Totally worth it.  I ended up taking the rest of the day off and just chilled with the kitties.