Last weekend, Mike and I were supposed to fly up to Markham to take one of his relatives for a surprise birthday flight.  Unfortunately, the weather was horrible (clouds below 500 feet) so we were unable to go.  The next day we were supposed to go to Exeter for a corn roast, but yet again, bad weather.  Geesh!  I’m kinda making up for it this week though.  I took someone up for a flight yesterday, which was planned about a month ago. We did some aerobatics, then flew over the Falls: 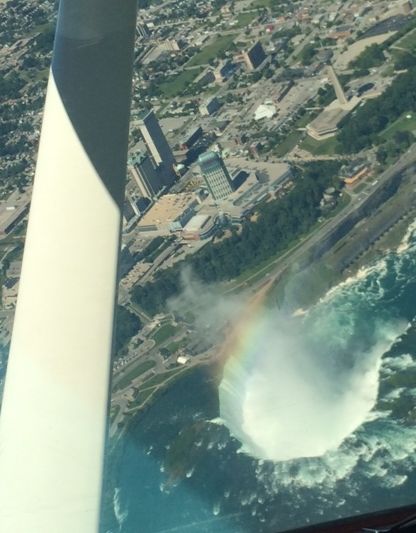 I then let her take control of the plane and fly over to Port Colborne.  Then back home for a landing at St. Catharines.  Great flight – she seemed to really enjoy it!  I believe her father wants to go for a flight next.

On the way home, I stopped off at my vet to donate some bed sheets and order Abby’s medication.  There was the most adorable kitten there.  Check out this little cutie:

Or this sleeping angel: 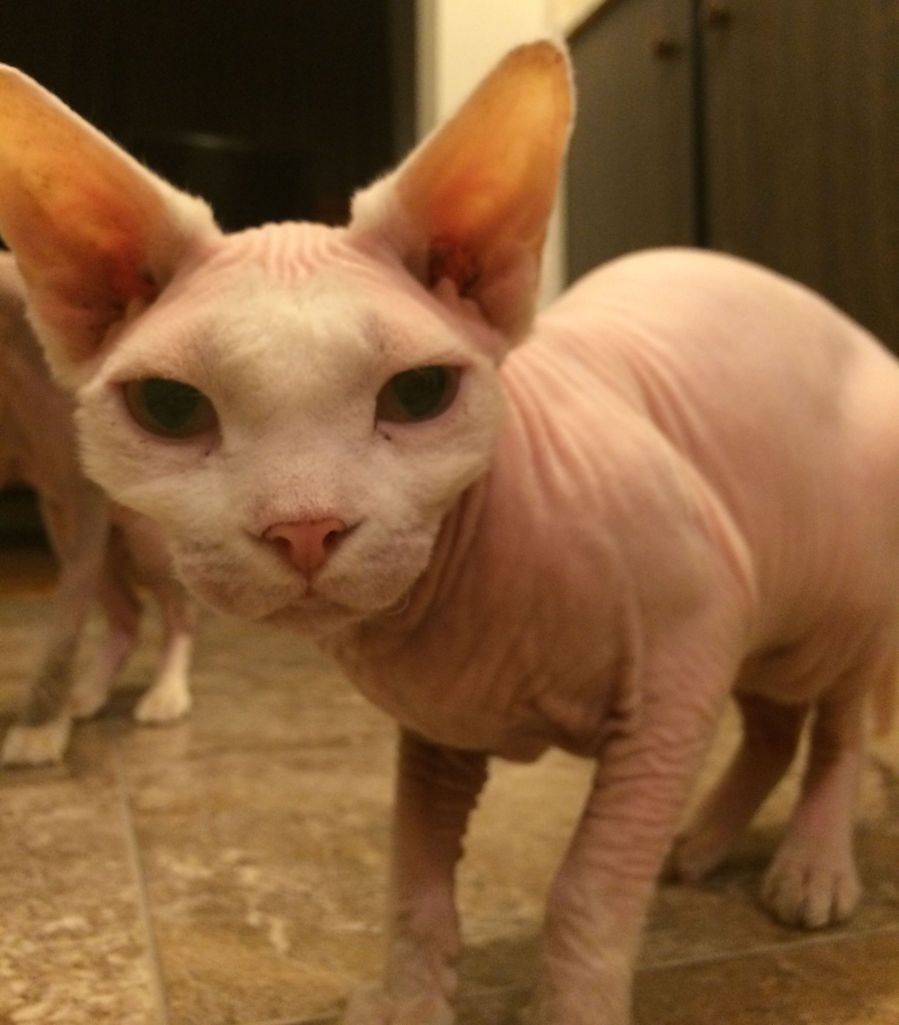 And of course, tiny and pancakey Mya:

I flew again today.  I took up someone who has been up with me twice before.  The weather was perfect today (for a passenger.  I prefer it windy and bumpy when I’m up by myself!) so it was another great flight.

I was thinking I had a lot more to report, since it’s been a while since my last blog.  Hmmmm…..  I’ll ponder and perhaps do another post over this long weekend.  Until then, enjoy these cute pics: 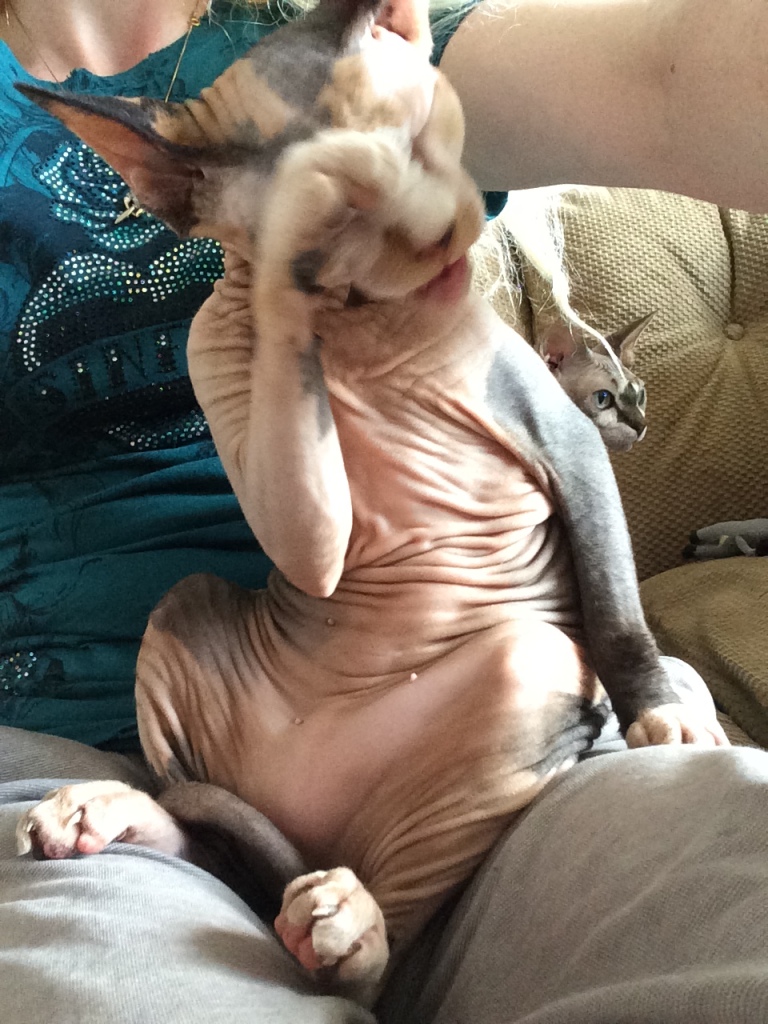 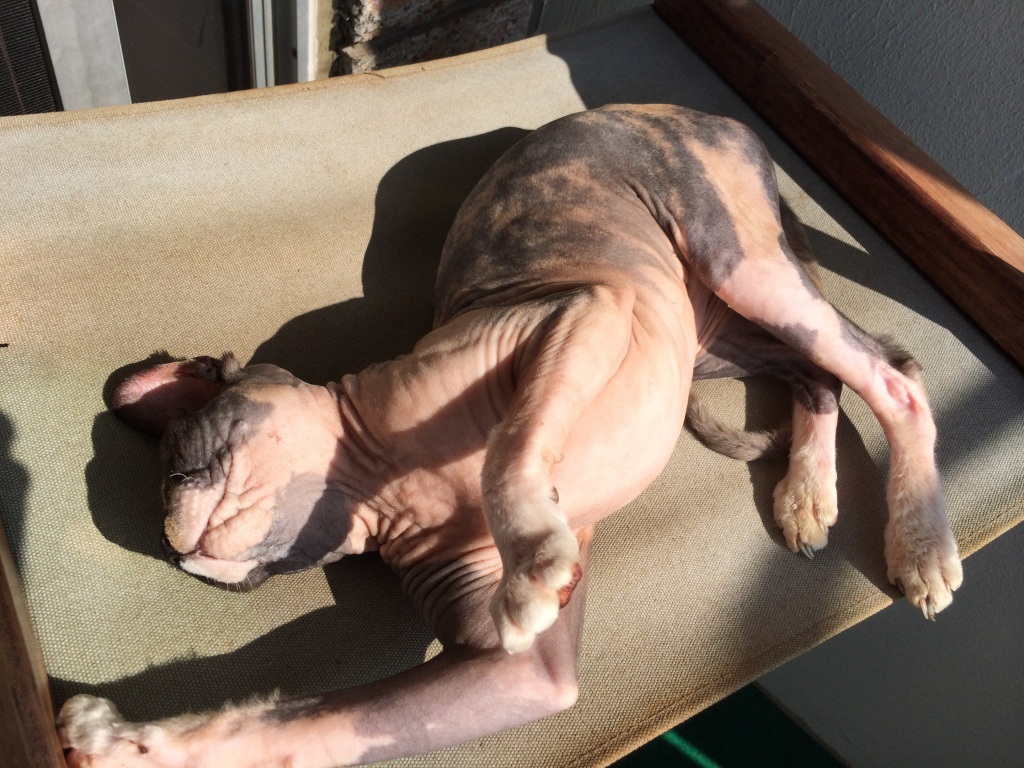 Today’s symptoms: Felt quite good today, which is nice since I wasn’t feeling to great during the first part of the week.  Just a bad headache today and the normal MS aches and pains.

The weather wasn’t too great this weekend but Airport Fest was still on.  It was really windy Saturday morning and raining on and off.  There were supposed to be about five or six planes flying in from other airports to display their planes, but had to cancel due to the forecast storms in the afternoon. Mike and I headed to the St. Catharines airport around 10:30 and taxied my plane over to the display area on the ramp.  Despite the weather, there was a good turn out.  Just about every kid there said “There’s Dusty Crophopper!” (from the Disney Planes movie) when they saw my plane.  They were really excited to sit in it too: 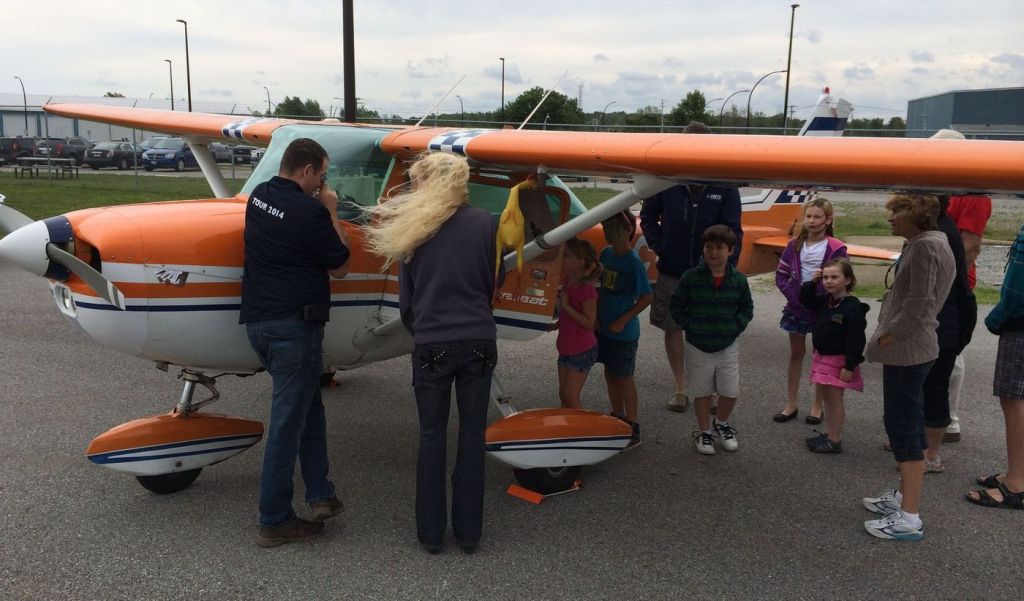 They also liked the rubber chicken hanging off my pitot static tube:

Also on display were a couple of our Recreational Aircraft Association member’s airplanes, a couple Harvards and two Trojans, which did a nice fly by:

There was also a photographer from Snap magazine wandering around.  He “snapped” this pic of Vyctor and I:

Unfortunately, the heavy rain came in around 2:30 and we had to end the outdoor portion of Airport Fest.  It was supposed to go until 5:00.  Oh well, at least we had a few good hours.

Due to the airport commitment, we missed the birthday party for Mike’s niece Rowan.  We went to their home last Wednesday to bring her pressies and also see their one son’s last t-ball game.  Here she is opening our gifty:

You can see the other pressie on the table – an educational airplane.  We also got her the cutest shirt ever.  I really wish they had it in my size too:

I would so wear that!

What we did miss by not being at the party was her mother’s amazing Alice in Wonderland cakes.  Here’s the before pic: 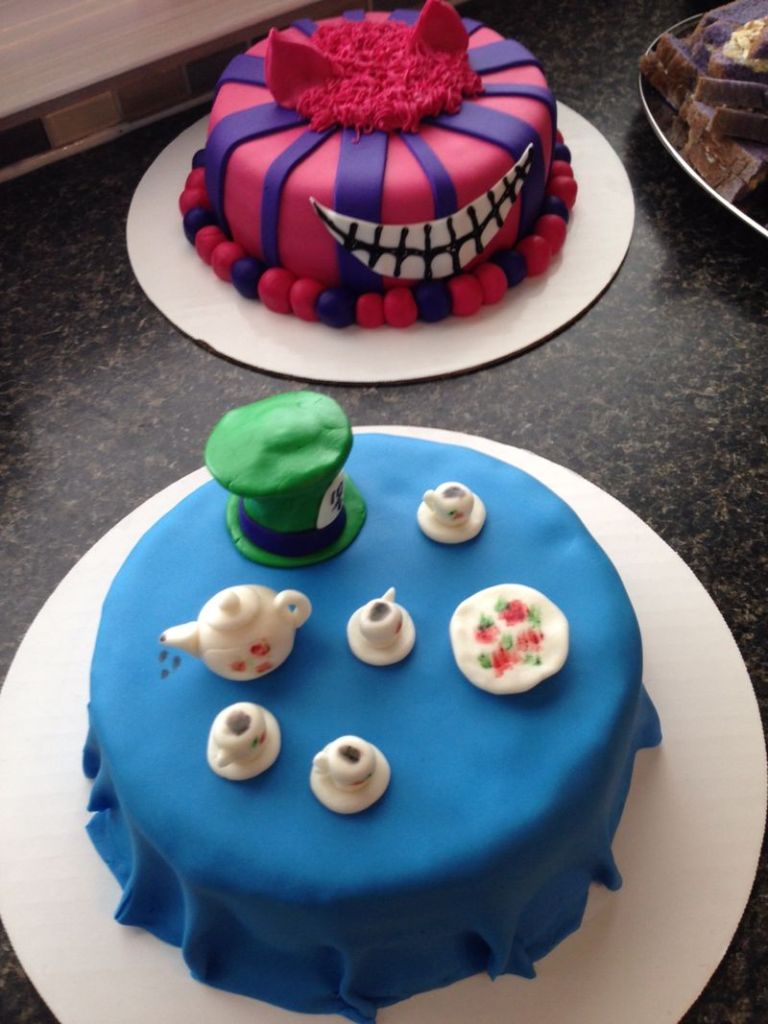 And here’s the after:

On Sunday morning, I had to go to the walk-in clinic yet again for my eighth bladder infection since January.  Ugh!  I was feeling quite weak that day so Mike and I just chilled at my place.  We got out the laser pointer for the kittahs:

Then Mike caught an Abby with one of their toys:

Then we watched a movie with all four of them on us:

At home from work yesterday (still feeling very weak from the infection), I heard a short screech of brakes then heard a metal crunching slam.  I ran out to the balcony and saw the aftermath of an accident.  I got on the phone and called 911.  It didn’t look like anyone was hurt, plus there were quite a few people running over to the folks in the cars.  The speed of the emergency folks was pretty impressive  They were all there within minutes of my call (and I’m sure there were at least a few other calls):

Within twenty minutes of the actual crash, they had the vehicle off the road and the emergency folks (minus one cop) were all gone.  Very efficient!

Today’s symptoms: Still feeling very weak and all around blah from this infection.  The doctor said that I should go get an ultrasound of my bladder.  I told him I’ve had two plus two cystoscopes in the last few months.  I also take on a daily basis cranberry juice (also known in Lizzyland as Bladder Sauce), D-Mannose, garlic pills, acidophilus, apple cider vinegar, vitamin C and vitamin D.  Pretty much everything I know of to reduce the frequency of bladder infections.  Not working for me though!  Going to start feeling better tomorrow – looking forward to it!

I took some vacation last Thursday and met up with some friends from work (two retired) for lunch at Bistro 61 in Niagara-On-The-Lake.  Had a bit of a hard time finding parking, which HAD to be free.  After driving around the block, I think I found the last free spot in the area.  Mind you, people probably didn’t want to park there because of the post.  Wusses:

Great restaurant – my first time there.  We had a nice visit and were able to get caught up on everything:

Got home and let the four naked ladies out on the balcony for a little sun:

Glad they were all happy.  I wish I could have said the same about my little Betta fish, McMortimer.  He was starting to go downhill for a few days.  He finally passed away.  Just like my previous Bettas (Guido, McGuildenstern, McRosenkrantz) he was buried in my mother’s garden.  I wrapped him up neatly and kept him in the freezer until I met up with Jan: 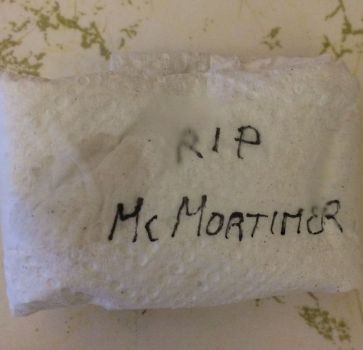 The next day, I “rescued” a new Betta.  I’ve only had males in the past but decided to get a female this time.  I usually get the one that isn’t the most eye-catching, just out of pity.  So, without further adieu, please meet McCordelia: 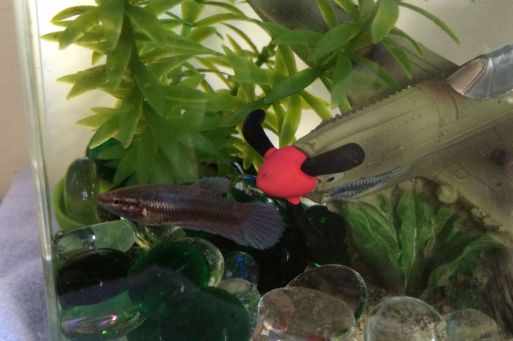 The cats knew right away that it was a new fish:

As for the weekend, it was quite good.  Mike and I were going to fly up to Edenvale on Saturday, but I wasn’t feeling quite well enough to go that far.  We decided to fly to Tillsonburg for breakfast instead.  Part way through the flight, Mike decided to play a game on his iPhone: 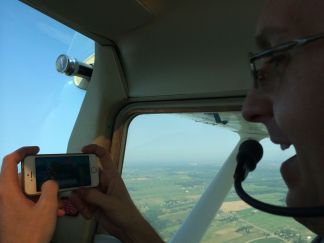 We had a great meal at the restaurant in the terminal building of the airport: 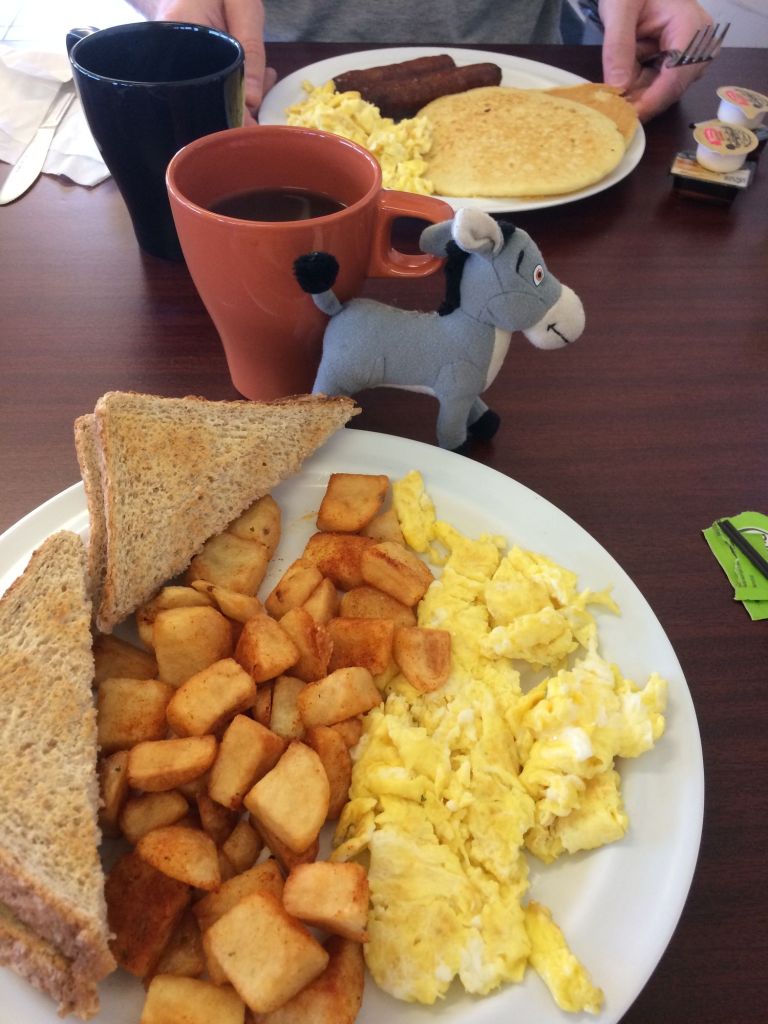 Back safe and sound in CYSN:

Unfortunately for kitties when we got back, it was bath time:

All four had a cleaning this time including little princess Mya:

They were not amused but quickly got over it.  Mind you, Abby may have become possessed during her bath.  Not sure what pose this is supposed to be:

For dinner that night, Mike got us some tasty noms from Wendy’s.  I set the straw for his pop on the table while we got things ready in the kitchen.  We came out and the straw was gone.  I just figured that I didn’t actually put it out, so I got him another one.  After dinner, I put some stuff in the recycling bin on the balcony and voila!  There’s Mike’s straw

Boo’s so naughty.  I don’t know how many things she’s dropped down the space on the floor by the railing, down to the 9th floor.  Geesh.

I was able to go for another flight last night.  We had our monthly RAA meeting at the Welland Airport.  Like a true classy lady, I climbed up on Vyctor to check the fuel before we left:

The weather wasn’t the greatest but it was certainly flyable.  Hoping it’s nice on Saturday for Airport Fest at the St. Catharines Airport!

Today’s symptoms: Feeling rather fatigued but I’m still dealing with a bladder infection.  What else is new?!  I’ve had a pretty bad headache for going on the last week as well.  Other than that, things are pretty much status quo.

Well it happened again – little Pinky got quite sick.  Last time she was ill, the vet wanted me to get a urine sample.  The next morning, I woke up around 5:00am to use the washroom.  Pinky got up too and went into the spare room with the litter boxes.  I actually waited with her for over two hours, both of us locked in the room, until she finally peed!  Mike drove me to emergency vet clinic to drop off the sample.  Pinky actually did much better that day and wasn’t sick once.  The vet called later in the day to say the results were normal.  Fortunately, she hasn’t been sick since, and she’s back to her cute little pink self: 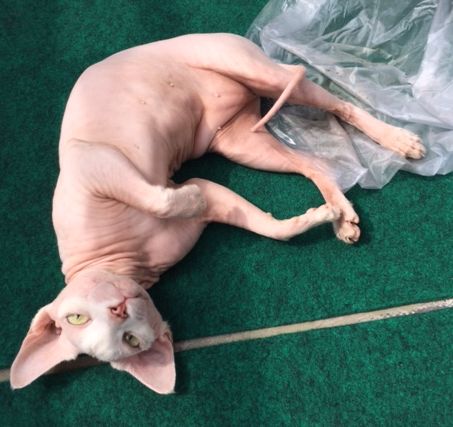 It’s been a good long weekend.  Mike and I went to iHop for breakfast/lunch today.  Since we were going flying later, Donkay joined me as he usually does for flights.

The waitress came by and yelled “It’s DONKAY!”  It was so funny – really quiet in the restaurant at the time too.  It was kinda nice that she called him by the right name, as usually people say Eeyore or just donkey.

After the great noms, we headed to the airport.  I wanted to fly us over the Lake Erie shoreline to check out all the folks on the beach.

We also saw this interesting scene – there’s a massive iPhone submerged just off the shore, as you can see in the bottom left of this pic: 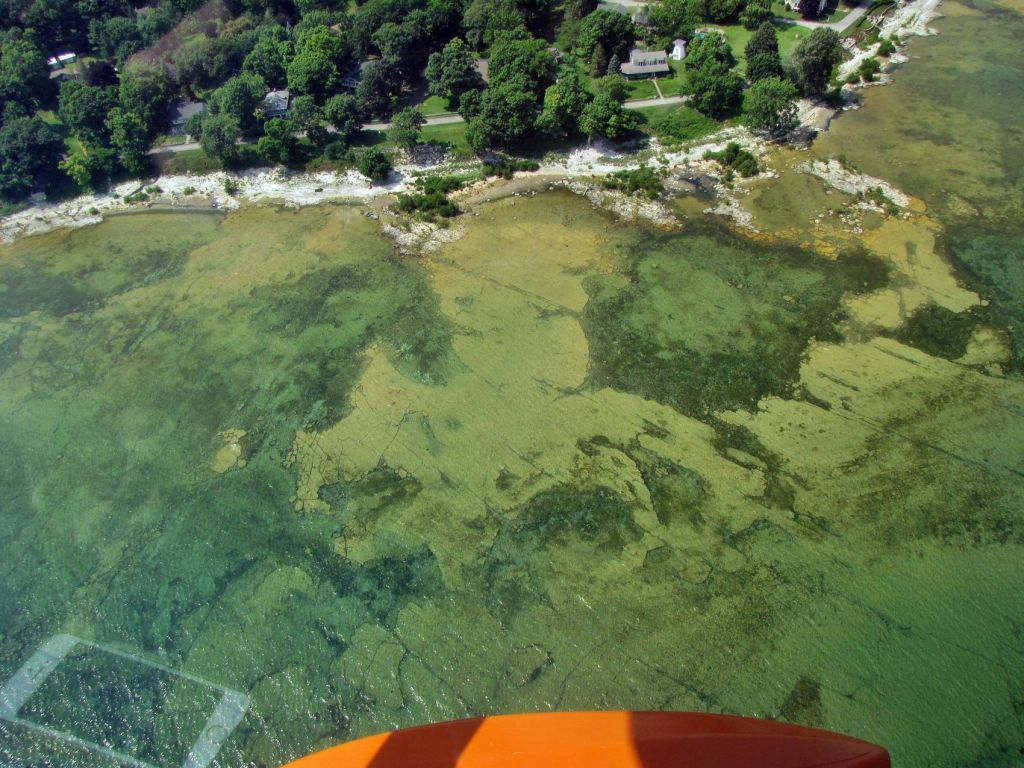 Yet another amazing natural formation in Niagara!

We also saw this awesome boat:

We also flew over the new outlet mall in Niagara-On-The-Lake.  We were just there the day before but it was just a tad busier today:

Today’s symptoms: Feeling pretty good today but had a really bad headache.  A few more aches and pains all over than “normal” and feeling a tad nauseous this evening.