Yup, still sick over here.  This has to be the worst cold and sinus infection I’ve ever had.  It doesn’t seem to want to go away.  Although I kinda thought I was feeling a bit better on Friday.  I decided to go to work and arrived around 9:00.  I was doing fairly well, but then totally crashed around noon.  It probably didn’t help that I walked to work that day – not by choice, though…my battery was dead on my car.  Fortunately, a good friend was kind enough to drive me home.  I ended up having to go back out that afternoon to bring little Abby to the vet.  The vet’s office is only a three minute walk from my apartment, at least.  I had her carrier all ready with the heating pad in the bottom.  Ten minutes before her appointment, I went to plug it in.  However, there was something in the carrier:

Yup, it was invaded by a little pink freak.

At least she warmed up the blanket for Abby.  Needless to say, she didn’t move once I plugged in the heating pad.  Eventually though, Abby and I had to leave.  Nothing new wrong with her, just was hoping to change up her meds a bit as they don’t seem to be helping anymore.

Little Abby at the vet: 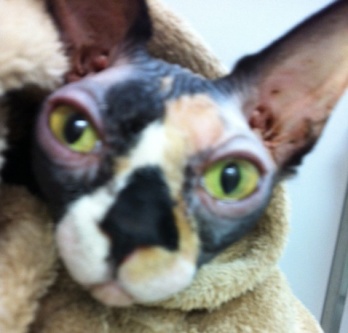 She’s always so well behaved and seems so calm, but I know how stressed she really is.  Hopefully these new meds will help though.

After dropping Abby off at home, I had to walk over to the drug store (less than five minutes away) and pick up a prescription.  About an hour after getting back home, all snuggly in my jammies, the specialist I went to on Wednesday called.  I had some lab work done and it turns out I have a bladder infection.  Oh great.  Sinus and bladder.  I just need a case of athlete’s foot and I’ll be infected from head to toe!  Needless to say, they had to call in a prescription to my pharmacy.  Had to get dressed again and head back over.  I hope this means I’m getting everything over with at once and I’m going to feel quite good at least for the next few months!

The kitties have been great company while I’ve been crashed out on the couch and bed.  They’ve also been rather licky: 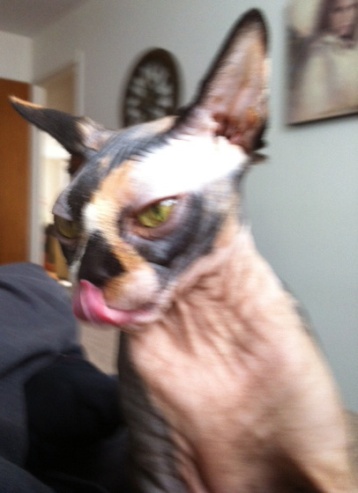 Just a minute ago I asked Pinky to do a lick, but she just looked serious instead:

Mya is far too regal for licky shots.

Started feeling quite a bit better this morning.  Met up with a friend for a coffee then called the CAA folks to boost my car.  Turns out I left the little ceiling light on.  I never turn it on – I’m assuming I hit it with my backpack while lifting it over the armrest.  Duh.  Not feeling as good this afternoon though.  Really, really tired and fatigued.  I’m sure these antibiotics have something to do with it.  Evil little pills.

Today’s symptoms:  A fairly bad headache, but I think most of it is sinus infection related rather than from the MS.  Quite a few aches and pains in my forearms, but more than tolerable.

Kinda bummed out today.  I was invited to my boyfriend’s nephew’s birthday party (turned two), but this cold has a good hold on me.  I actually woke up today feeling worse than over the last few days.  Fortunately, Lil’ Jan came for a short visit and brought me some cold meds.  They are really helping.  I usually don’t take anything for colds – I figure I’m already on enough meds, so don’t take extra unless I’m really desperate.

My little mother helped wrangle up three of the four kitties, who needed a bath.  Here is an unhappy albeit clean Pinky: 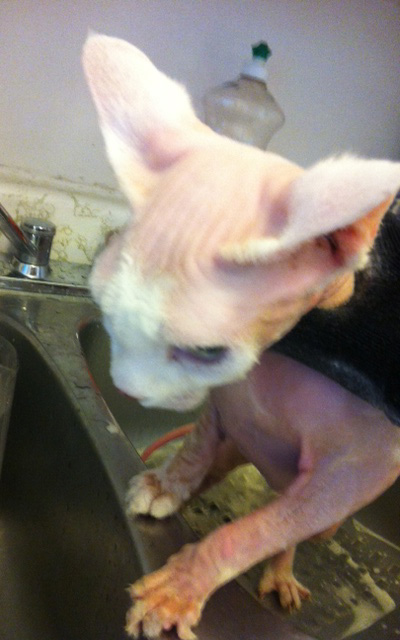 And an equally unhappy Abby:

Boo also got a bath but I forgot to snap a pic.  She was too busy screaming anyway.  Mya only needs a few baths a year, as she doesn’t get as oily as the others.  I asked Mya to give me the cutest face she could muster up, and if it was good enough, I wouldn’t give her a bath this time.  This is what she threw my way:

Anyway, had a nice visit with the Janski, and since she left, I’ve been laying on my couch like a blob.  Looking forward to sleeping tonight (have hardly slept the last few nights) and feeling MUCH better tomorrow.

I had a really nice surprise come my way yesterday.  Apparently, I’ve been awarded the Queen Elizabeth II Diamond Jubilee medal.  This is what came in the mail:

I phoned the manager at work to find out what it was all about.  She said I was nominated and selected for the work I’ve done with fund-raising for the MS Society.  I’m still in shock!

Today’s symptoms: Still feeling yuck-o-la from this cold.  Having some MS aches and pains in my forearms though – quite bad today.

Last weekend, I went to my boyfriend’s place to meet his folks, sister, four kitties and to see his plane.  He has four Siamese cats and they are so adorable.  My favourite looking one has to be little cross-eyed Sammy:

Duchess getting a belly rub: 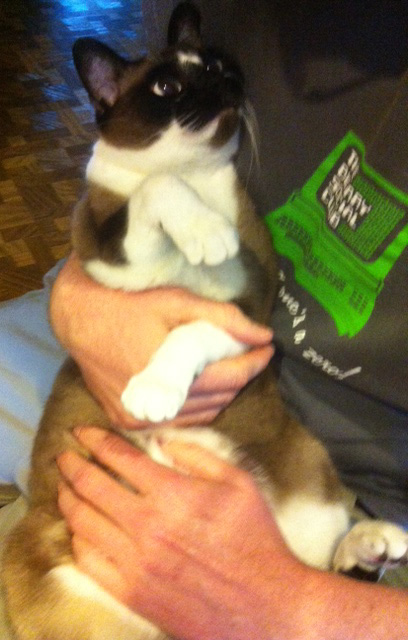 Coco stared at me the entire time I was eating – it was so cute:

After a great visit, I drove back home and did a few things around the apartment.  Mike met me there soon after.  Before leaving, there was this interesting little gathering around the bathroom sink.  Weird kitties:

We had a potluck to go to that night in Fort Erie, with a bunch of pilot folks.  I decided to make fudge to bring:

There was an amazing turn out at the potluck.  Must have been over 60 people there.  I met up with a few folks I knew.  Mike and I sat with my airplane mechanic and his wife.  It was a truly great night, except for the fact that Mike and I forgot to go back up for dessert.  Sniff, whimper.

At work yesterday, someone had a birthday.  Someone on her team made her this awesome beach scene out of cup cakes:

I didn’t go into work today as I was hit with a fairly bad cold.  Just spent the day in bed and on the couch.  At least I had lots of little kittahs to keep me company.  I have tomorrow off as my compressed day, so I’ll have another day to recover.

Today’s symptoms: Felt quite yuckola.  Hard to tell how much of the fatigue was from MS and how much from the cold.  Hopefully it doesn’t last much longer – I don’t have time for this silliness!

So far it hasn’t been a very good week.  I’ve been hit with a couple days worth of not-so-enjoyable symptoms.  Far worse fatigue than normal and really bad pain throughout my body, mostly in my arms and hands.  Tomorrow needs to be better because I’ve had enough of this silliness!

Other than that, the weekend was great!  Went to see the film version of Les Miserables.  It was exceptional.  I saw the live version many years ago.  I knew there was a scene coming up where I was really going to have to fight off the tears.  I started thinking of not so pleasant things, and admired the bits of popcorn stuck to the wall.  I looked back at the screen briefly and started crying.  Ugh!  I’m such a dork!  Mind you, I heard other sniffs and whimpers in the theatre too.  My boyfriend (Mike) was quite nice about it though and was rather comforting.  However, I still felt like a dork.  Anyway, the movie was excellent and we would both recommend it.

There was a bit of an injury on the weekend and despite only being slightly nicked by my ring, it turned into a “two inch gash.”  So, nurse Lizzy to the rescue!  I gave him an extra kitty band-aid to take home and he decided to taunt his cat (Blue) with it rather than cover his gaping wound: 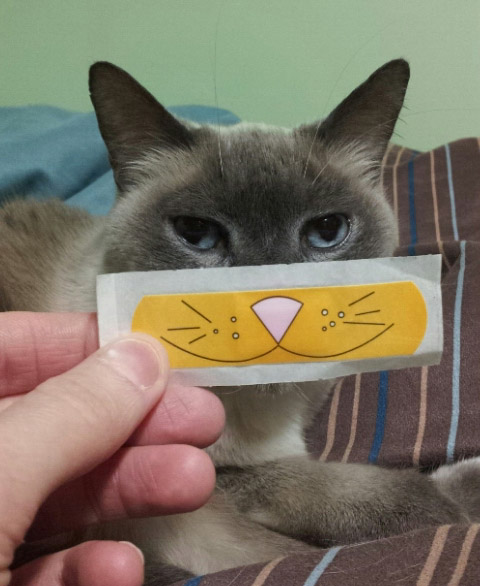 We were watching TV the other day and were rather shocked to see this pop up on the screen: 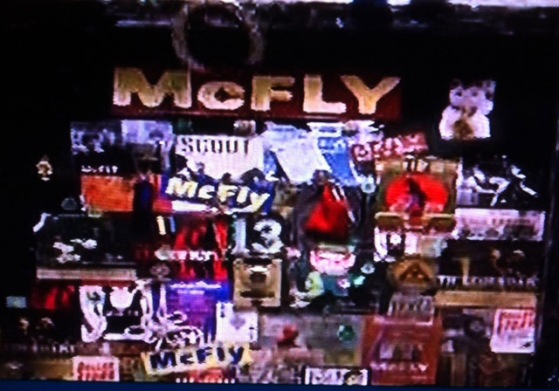 Finally!  I’m famous!  Ok, I actually have no idea what this was referring to, but it was still pretty darn cool.

Feeling rather yucky today, I didn’t think I would make it until the end of my work day at 4:45.  Made it though!  Actually, getting out during morning break helped to perk me up a tad.  As it’s Tuesday, my friends and I wandered through the market, which is just behind our office. 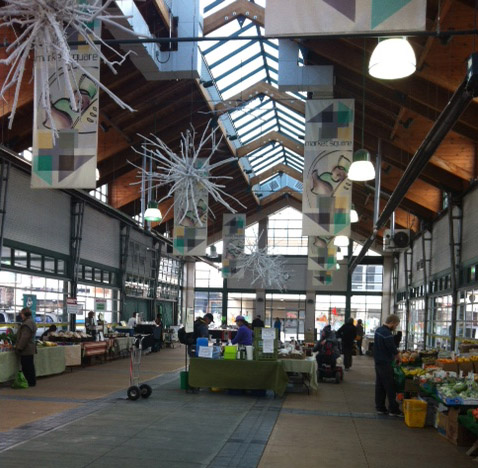 It’s usually a little sparse on Tuesday’s, with more vendors on Thursday and Saturday.

Today’s symptoms: Didn’t feel well at all.  Got to work an hour late because I couldn’t get up in the morning.  Crushing pain in my forearms and hands for much of the day, really bad fatigue, a headache and general aches and pains all over.  Really looking forward to going to bed soon!

Like Loading...
Had a great day last Saturday.  Ended up going to the Bird Kingdom in Niagara Falls, which I’ve never been to before.  I was really hoping on knocking an item off of my ever dwindling bucket list – to hold a tarantula.  I was able to look at one, but no touchy:

There were tons of great animals there.  I kinda felt bad that some were in rather small habitats though.

I can hear my mother screaming while she looks at this pic: 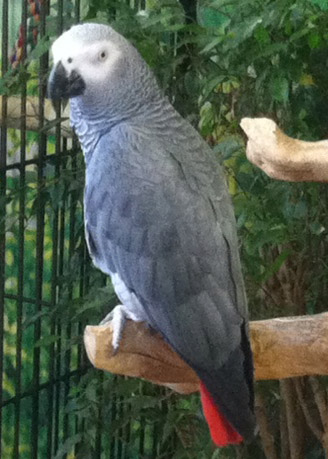 We went into the nocturnal area.  There was a big sign when you entered, stating “No Flash Photography!!!!”  Of course, the person that came in behind us snapped a pic with full flash.  We all grunted and pointed at the sign.  She got the hint.

Check out these cute little (well, rather large actually) cockroaches: 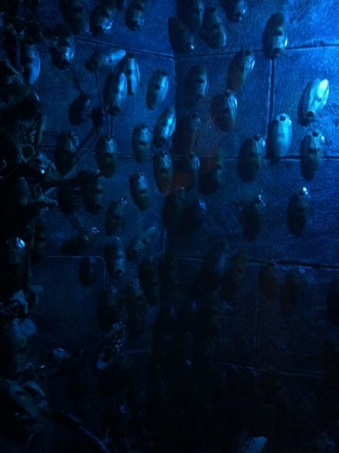 This little blue lobster was one of my favourties.  So cute:

We then wandered into the main open area, which was way bigger than I thought it would be.  All of the birds were totally free to fly around.

I tried to touch this dude but he hopped away when I got within an inch:

We went into the Lorakeet cage and got to feed the birds with little cups of nectar.  It was awesome!

Despite not getting to hold a real spider….

This stuffed one was rather nice!  We had an amazing time.  Also came home with a couple of friends.  We were both kinda attached to the stuffed snakes – mine of course was orange to match my plane, and his was green (his fav colour).  The kitties liked them too:

I love how Pinky is cradling him in her paw:

Unfortunately, Sarge, the German Shepherd got a hold of the green one: 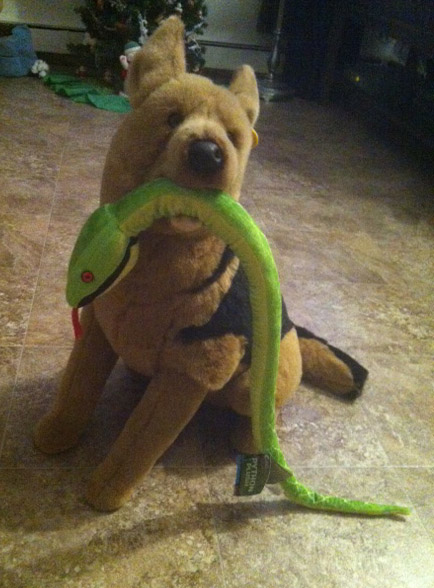 He’s ok though – it was only a flesh wound!

The rest of the week was decent.  I went into work on New Year’s Eve day, then had the next day off.  Went back on Wednesday and had to leave just before 3:00, as it was yucky Tysabri infusion day.  I think there are issues with my veins because the IV is hurting more and more each time.  Survived it though and had my usual evening of feeling blah, then felt blah again today.  At least I had the day off.  I put away all of my Christmas stuff and did some other cleaning and sorting.  It really helped to keep my mind off of how poopy I was feeling.