I took a few days off of work last week and Jan and I went to Rochester.  We headed over the border around 8:30 on Wednesday morning and did a rather uneventful, less than two hour drive into Rochester.  We headed to the Marketplace Mall to start our shopping trip.  We hit most stores in the mall and walked out hours later with a handful of items totalling less than $50.  How sad is that?  Here’s what we purchased that day: 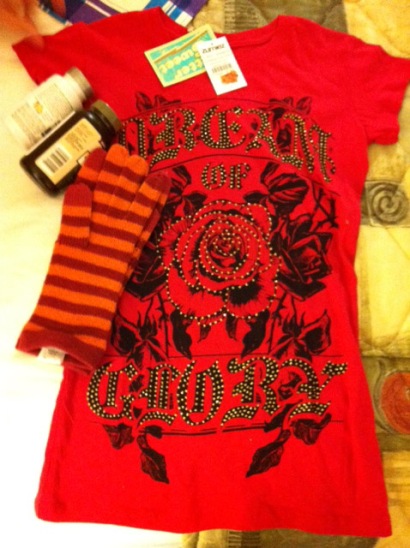 We checked into our hotel, a Best Western, just a tad depressed after a fun but unsuccessful shopping day.  Our spirits picked up a bit when we were told that we could have a free dinner over at the Holiday Inn next door.  I knew breakfast was included but was unaware of the free dinner AND one free drink each.  So, after bringing our stuff up to the room and having a small sip of the vodka we purchased, we walked over to the Holiday in.  The dinner was actually quite nice:

Ironically, I just mentioned on the car drive up that I haven’t had stew in years.  That was what was on the menu, along with mac and cheese, fish and soup.  The pumpkin pie for dessert was great too:

We both had a free rye and coke as well.  After noms, we decided to walk across the street to the Christmas Tree Shop, which is basically a discount store.  Rather than walk around the parking lot and use the sidewalk like normal people, we chose to make our way up the grass and gravel, very steep hill at the end of the lot.  It didn’t go too well.  I made it up the hill, grabbed the guardrail then reached behind me to help Jan up.  That was the time she started sliding back down.  I went down behind her to make sure she didn’t fall over.  We did the same process three more times until she finally made it up.  Perhaps we would have done a little better if it weren’t for the alcohol….  Anyway, we scampered across the street and into the store.  It was then that I realized that I dropped my iPhone.  Holy cow!  We headed back over to the hill, thinking that must have been where it fell out of my pocket.  Yeah, I’m going to find a cell phone in the dark.  I did think of calling it from inside the hotel.  First, I went in to check the bathroom and the table where we were sitting.  No phone.  I headed back out to Jan to search around the hill a bit more.  We only looked for a matter of seconds when we both spotted it at the same time.  It was almost impossible to see and we have no clue how we both saw it.  Needless to say, we decided to go around the parking lot and get to the sidewalk the easy way.

In the store, Jan noticed this charming little number and posed with it:

I don’t think we ended up buying anything that night.  Instead, we headed back to the hotel.  Once again, at the exact same time, we noticed something on the ground:

This night was getting a tad creepy!  Back at the room, we had a few more sips of vodka then went to bed.

The next morning, we enjoyed our free breakfast downstairs, then headed out to the Eastview Mall, which was about 20 minutes away.  This mall is huge, with a lot of really nice stores.  We ended up spending the whole day there.  Fortunately, we came back to the hotel with a few more purchases than the previous day.  I don’t think I’ve ever been in the Buckle store without buying something.

Back at the hotel, we asked if the free meal thing was still in effect and were told it was.  A few swigs of vodka (gee, what a pair of lushes!) and we walked back over to the other hotel.  Tonight was ravioli, grilled BBQ chicken and green beans.  Another really yummy meal.

I think the alcohol made me a tad artistic (or something):

After our meal, we headed back over to the stores across the street.  We came out with about six bottles of B12 vitamins, as they were much cheaper there than back home.  We also went to the pet store and I bought a huge bag of cat food.  We kinda took the long way back to the hotel, at which time Jan wiped out on the grass.  We were able to get most of the mud off of her jeans back in the room.

The next day, we just hit some of the big box stores around the area.  We were both quite pooped after our previous two days of shopping, so we headed home just after noon.  It was a great trip – we both had a blast!

Needless to say, I was totally exhausted when I woke up on Saturday.  I had to find a way to perk up as I had our Recreational Aircraft Association Christmas dinner that night.  I went with another member, which was a good thing since I was a little tired to drive.  The dinner was at the Fireside Restaurant in Welland.  About twenty members attended.  It was really nice.  I had their turkey dinner:

I was only able to finish about half of it, so had the rest put in a container to go.  On the drive home, we were chit-chatting and then came up on a red light a little fast.  I pointed and said “red light” and he quickly applied the breaks.  Unfortunately, my to-go container slipped out of my hand and landed on the floor, spilling out half my meal.  Oops!  About ten minutes later, I started laughing about something and the container fell yet again, emptying the rest of the contents.  This is what his car mat looked like:

I felt so bad, but we both found it rather amusing.  I dumped the food out at the edge of the parking lot and then headed upstairs for the night.  I was given some lovely flowers, so I placed them in a glass (couldn’t find my vase).  Boo didn’t take long to scope them out: 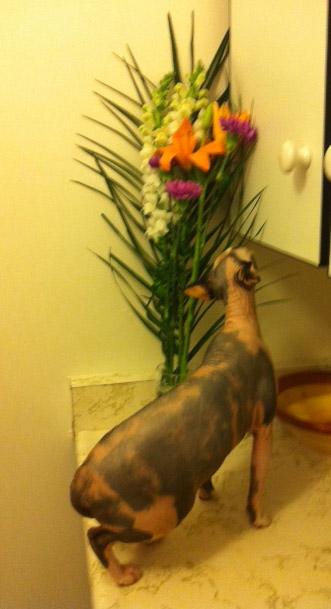 Her and Pinky are the reasons I had to get rid of my plants – little monkeys.  I had to keep the flowers in my closet over night, since she would seek them out no matter where I hid them.  I’ve had them out next to my TV while in the living room, so I can keep an eye on them.

Today’s symptoms: I slept in until almost 10:00 today.  My bod totally need the extra sleep.  My fatigue level wasn’t bad at all today, just a headache and the usual aches and pains.

I was going through some of my old photos and found this charming little Christmas pic from 2008.  That’s my fluffy kitty Beau (deceased), little hairless Mya and my skinny pig Spartacus (Sparty, also deceased):

Fortunately, my family now is just as cute.  The four kitties, fish, my little mother and I are going to spend Christmas as my place this year.

The weekend was quite good, after a not so pleasant week.  My fatigue and pain levels were much worse than normal.  If I wasn’t so cheap, I would have driven to work each day ($8 to park) because during the walk home, my calfs were going into really painful spasms.  Not fun but I know this week will be better!!!  Anyway, the weather wasn’t good enough for flying, but at least I was able to go up once during the week.  I took up another pilot for aerobatics and actually let him try a loop and a roll!  He loved it!  On Saturday, my friend and I went to the States to get some gas and a few things at TOPS.  I also picked up my packages from online orders I had sent to a US post office.  Here is one of the items that I ordered online as a gift from Jan to moi:

Another odd item is the Christmas tree I put up every year at work:

Today, Jan came over and we went for our Sunday Timmies and grocery shopping.  When I got home, I gave all the kitties a bath.  It’s surprising that they love being up on the bathroom counter, but they despise the kitchen sink (where they get bathed):

Little dorks.  Here’s another pic of three of them together – a typical scene on my bed:

Today’s symptoms: A little tired but I had a busy day yesterday.  For some reason, I’ve had a killer headache for the last three days.  Hopefully I wake up without it tomorrow, because it really isn’t fun anymore.