I can’t believe how this week is flying by!  Speaking of which, despite the rain on Monday night, I was still able to fly out to my Recreational Aircraft Association meeting in Welland.  Yup, an arduous seven minute flight south of St. Catharines.  I passed this boat in the canal on the way:

It started to rain right after I took this pic.  The clouds were still fairly high and the visibility was decent, so I carried on:

On a bright note, I got a free plane wash out of the deal:

I had to get Vyctor back to St. Catharines by 8:00pm, so he could be safely put away in the hangar for the night.  Fortunately, it was only drizzling by the time I had to leave.

It’s been a busy time, as it’s Public Service Week, so quite a few events at work.  I was asked to be the photographer for the events.  Today was my compressed day off, but I was asked to come in to take pictures of the recognition awards ceremony.  Also, I was nominated for an award.  Yea!  We were given ice cream cake after the presentations.  I think it’s the first time I’ve had it – quite good! 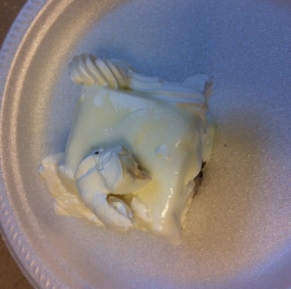 This morning, Jan and I went to the States as I was running low on cereal and soup.  Check out this new joyous yum-ol-a product:

Mmmmm…..Cinnabon…..if they had Cinnabon spaghetti, I would buy it!

Anyway, we hit Timmy’s on the way back, then to the pet store and Costco.  I then went out to Fonthill for my 11:45 doctor appointment.  Back in St. Catharines, I dropped off my car at the apartment and walked to work.  Since I went in on my day off, I get to leave early tomorrow, which will be nice.  On the way there, I passed this person driving around with a Tim Hortons coffee on their roof:

I blurred out their face to protect them from embarrassment.

I had my pre-op appointment at the hospital yesterday.  I was told that someone needs to be with me the night after my surgery, so I don’t die from massive blood loss or something.  Fortunately, my little mother has agreed to sleep over that night.  My friend from work was so kind in lending us her air mattress, so Jan doesn’t have to sleep on the couch – thanks again!!!  I was given some post-surgery instructions, which indicated that I should breath once I’m conscious: 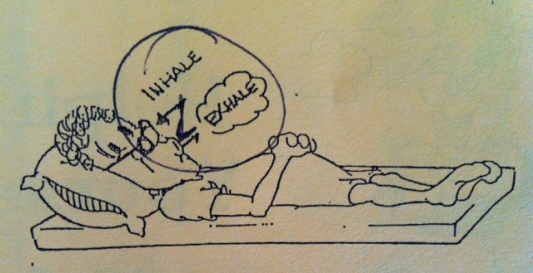 Good to know!  I’ll set a reminder on my iPhone just to be sure.

I believe this diagram indicates which way the blood and phlegm will fly from my body: 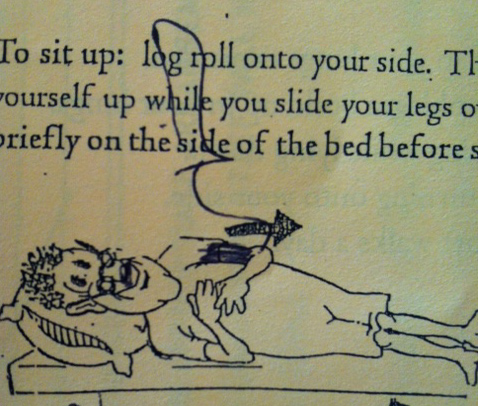 I like how the nurse also drew a picture of blood-saturated gauze under the nose.  Yup, feeling great about have this done next week.  Yee-haw!

Today’s symptoms: Felt pretty darn good except for some crushing pains in my left hand.  A tad more fatigued than usual, but I also did a lot of running around today.