As it’s Good Friday, I had the day off.  The weather was great so I of course, went for a flight.  Actually, had more than one.  I took up my friend’s two sons and the oldest son’s girlfriend.  The younger son went up first.  We headed out over Niagara Falls and checked out the whales and dolphins swimming around in the tanks at Marineland.  I was a little surprised when he said he wanted to try some aerobatics.  I texted his mother down on the ground, hoping that they were all outside ready to watch the show.  We did a roll, loop snap roll and a rather pathetic spin.  Vyctor wasn’t in the spinning mood today, so we only did about 3/4 of a revolution.  Anyway, he seemed to really enjoy the flight!  Here we are taxiing back to the apron:

Next I took up his brother.  He’s kinda like me and gets very car sick.  I mentioned how during the first five months of my flight training, I was really nauseous for every flight.  When I flew as a passenger in someone else’s plane, it was even worse.  Regardless, I was hoping three herbal Gravol and my anti-nausea bracelet would do the trick, but he still started to feel a little sick soon after take-off.  I was bummed that he missed out on going over the Falls.  Still, I think he at least somewhat enjoyed our brief flight.  After we landed, I shut my plane down and thought that was it for the day.  However, I was quite happy to have my friend walk over and say that the girlfriend wanted to go up too.  Once I started up, I told the control tower that I was back and ready to head out again.  We flew over the Falls and I snapped a couple of pics with my iPhone: 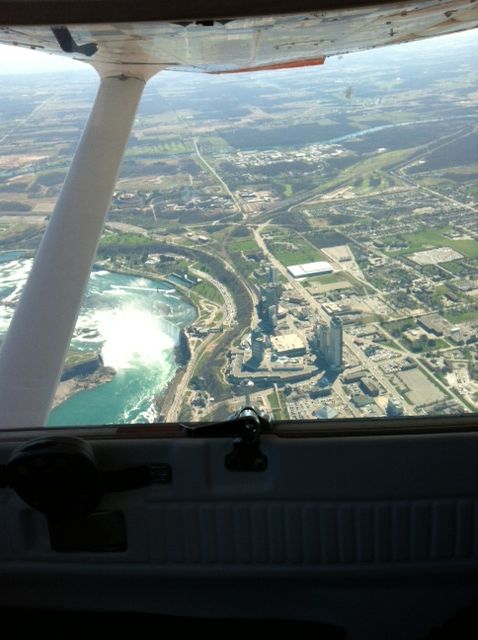 Not the greatest pics but I left my camera with my friend.  Anyway, everyone really seemed to enjoy themselves that day.  I love being able to give other people the experience of their first flight!

Before heading to the airport, I met my friend at her house for a visit.  She took me upstairs and showed me her son’s adorable little Gecko.  Her name is Peanut.  So cute:

She had quite the attraction to the Cessna logo.  Pilot lizard, perhaps? 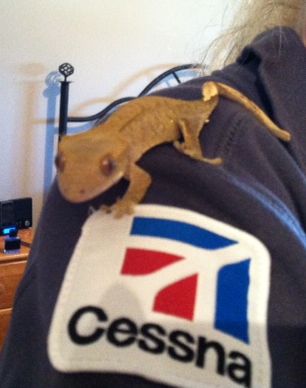 My friend finally got some well deserved and long over-due revenge on me.  While at my apartment, twice she had one of my kitties some how manage to get poopies on her.  Come to think of it, may have been three time.  It’s amazing it has happened to her this many times because to be totally honest with you, it’s only happened to me once!  And I live with the goobers!  Well, Laura had the gecko trained to pee on me.  I know she gave little Peanut some sort of signal to do her business while up on my arm.  She “claimed” that Peanut had never done that to her.  Hmmmm….  Well, I guess when you compare it the situations I mentioned about my poopy kitties, I really should believe her!

After looking at the pics of the gecko, I see the resemblance to my googliest kitty, Abby.  Speaking of googly Abby, my mother sent me an email Easter card, which had a cat in it that meowed.  Abby went into full-out google mode while the cat was meowing away:

What a googly goober.

When I arrived home after the airport, I opened my door to the smell of fresh baking.  I figured that my wonderful little mother had gone into my apartment while I was out flying, and baked up some goodies as a surprise.  This must have been what it was because I couldn’t smell the yumminess until I actually walked inside – not out in the hall at all.  I set down my bags and opened the oven – nothing.  I checked the fridge – nothing.  All of the cupboards – nary a nom!  I had been duped!  I still don’t know how that wonderful aroma managed to get into my apartment and not waft outside, but it did.  Thanks for nothing, mother.  Still love you though!

Today’s symptoms:  Felt great!  Energy level was amazing and my pulled muscle issue seems to be getting better.