Chuck and I made it back from our shopping trip to Rochester.  We were pretty much shopped-out when we woke up on Sunday.  We had planned to do two more malls, but it didn’t quite happen.  After breakfast at the hotel, we went to Target, since it was the only store open before 10:00.  We made a few purchases there, then hit the Super Wal-Mart, since the mall wasn’t open until 11:00.  I actually bought quite a few gifts for my mother there.  Usually I just buy all of her presents at the dollar store, but I decided to splurge this year.  You’re welcome, Lil’ Jan!  Once we tackled Wal-Mart, I really needed a coffee (even though I had two during breakfast).  We had a coffee and split a cookie at Panera Bread.  We were a little shocked when they handed us a platter with our one, lonely little cookie on it:

Notice my overwhelming enthusiasm.  Mind you, Chuck took this picture right after I had a tremor in my right arm while carrying my coffee, causing me to spill some of it on the floor.

After our rest, we went to another part of the plaza and hit the pet store.  We bought Mya and Abby a “

Thrill of the Chase” by Play N Squeak.  Their site has a really cute video: Check it out!  Abby was going nuts just listening to the video.  After the pet store, we went to Sally Beauty Supplies (mostly for Chuck’s hair products, such as curling irons, detanglers, pink highlights and conditioning treatments).  We ran into Michael’s, then off to the Marketplace Mall.  At this point, we were shopped-out and we ran around the whole mall in less than an hour.  I think we only went into about five stores and didn’t buy a thing!

It was a great weekend and very productive shopping-wise.  I hate to rub it in to y’all, but I’m almost done my Christmas shopping (just a few more items from the dollar store for my mother!)

I had to go to the tailor shop today to have two pair of pants adjusted.  I had to get the new pants I bought the other week at Melanie Lyne shortened about half an inch.  I also had to have another paid lengthened.  It was a pair I already had shortened by her.  I asked the tailor what she thought happened to them and she said “I’m sorry about that – I shortened them according to your mother’s length!  That’s why they look like shorts!”  She’s going to have to lengthen them now by about three feet.

I ran out of shampoo while in the shower tonight.  After I got out, I looked in the linen closet for a new bottle.  I was shocked to see a large stockpile of conditioners: 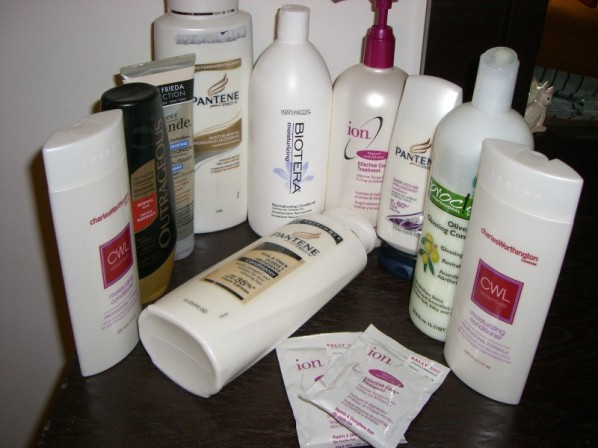 Today’s symptoms: I was a little weak and tired from our long (but great!) weekend.  I also started experiencing very sensitive skin on the right side and back of my neck.  I’ve only ever had this symptom on the front of my thighs in the past.