My Facilitator Training course at work ended yesterday.  It was probably the best training I’ve ever had.  I’ve never had so much fun or got so much out of a course before.  We all had to give a ten minute presentation using the skills we learned on a topic of our choice.  Most people did something work related, but I was a dork and did it on “perception”.  I used the example of one’s perception of Niagara Falls viewed from the edge and from the air: 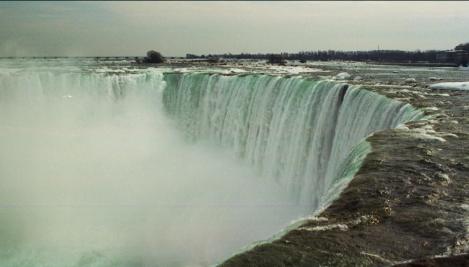 I managed to compare this to working accounts in the office…blah, blah, blah.  I hope I didn’t bore the instructors or my fellow trainees to tears!  The  presentations were recorded and I wasn’t sure if I was going to watch it or not.  I didn’t feel too good about myself after my presentation – this didn’t surprise me since I tend to be insanely critical of myself.  However, I decided to take the plunge and view the video last night.  It wasn’t too bad.  I seem to wave my hands around quite a bit.  Maybe I just found the room a tad stuffy and was trying to get some circulation going…I’m sure that’s what everyone suspected and were quite impressed with my selfless efforts to make them more comfortable.

What a great day today!  Spirits were quite high at work since it was Friday and some folks dressed up (or down!) for Halloween.  I didn’t really go as anything, but had on my skull and crossbones black nylons, a rather short skirt and I painted my nails black.  I figured I could get away with the short skirt, being Halloween and all.  It was a little drafty on my bum though.  If they tried to send me home for the skirt length, I was just going to tell them that it was my costume – I was a taXXX Collector…
We had free pizza at lunch through our social committee.  Around 12:30, Kathie (sits next to me) and I decided to go into the room with the food and see what was left.  Ray (sits on the other side of me) had to listen to us whining about half an hour earlier how we couldn’t decide whether we wanted pizza or not.  Kathie said that she wasn’t going just for the simple fact that it was free (apparently she has issues with hoarding free items).  So, half an hour after our whine-fest, we decided to saunter to the other side of the office to check it out.  We were blown away when there wasn’t a soul around and all that remained of the food was a pile of empty pizza boxes and three empty coolers which just moments earlier contained pop and water.  The residual smell of the feast still lingered in the room.  We both began salivating.  I rushed over to the stack of boxes, hoping for a forgotten slice, a couple crumbs or even a little puddle of grease – nothing!  Nary a crumb nor drop of grease to be found!  We were devastated!  Dejected, we walked back to our desks at the other side of the office, our heads hung in despair.  When we got back, Ray taunted and heckled us for our previous whining.  He said it served us right!  It was hard to argue with him – our failed mission caused such a deep feeling of overwhelming sadness, we hadn’t the energy to fight back.  Suddenly, without warning, a colleague approached us, concerned for our sorry state and obvious hunger.  She told us there was a large bowl of Lindt chocolates near the Assistant Director’s desk, towards the back of the office.  Kathie and I instantly sprang back to life!  Ray joined us as we literally ran to the prized bowl of ecstasy!  I somehow sprinted past them (it must have been the lack of material around my legs) and dove at the chocolates.  The Training Coordinator yelled “Hey, you!  Put that back!” as I hefted the massive bowl into the air, like the Stanley Cup.  I followed her demand and lowered the bowl back on the chair.  I asked how many we could have and she said one each.  I said “One for each finger!”  We all grabbed a handful and frolicked back to our desks.  Victory!

Not too much planned for this weekend – probably a good thing after all my running around and sugar-eating today.  Chuck and I may stroll downtown to shop, then hopefully go flying on Sunday.

Symptoms for today:  I felt really good!  My energy was the best it’s been in a couple of weeks.  For the last couple of days, I’ve had a new symptom – it feels like moist (I HATE that word) heat emanating from my left calf.  Although, it would be a nice symptom to have in the dead of winter!