We’re in Erie, PA today, doing a little shopping.  I really mean “little!”  So far we’ve purchased two pair of shorts for Chuck and some magazines for my mother to read while she’s on the treadmill.  It has still been a great day!  The weather was rather icky during the morning, but it ended up being nice in the afternoon.

Upon arrival to Erie, we started our shop-fest at the Millcreek Mall.  It’s a nice mall.  There are plenty of larger stores surrounding the main mall.  After a couple hours there, we went to Damon’s Grill for lunch.  Great place!  For dinner, we went to Quaker Steak and Lube .  I had the biker chick salad, which had grilled chicked, candied pecans, strawberries, cranberries, and an amazing wildberry poppyseed dressing.  El Yum-O!  Here’s a pic:

I seriously think it was the best salad I’ve ever had.  After our amazing meal, we went to Target where we made our first real purchase of the day, consisting of two pair o’ shorts and some deoderant for my mother.  Not saying that she needs it – I mean, something that tiny can’t get TOO stinky….  Speaking of my mother, the ajoining room was wheelchair accessable, so also had to peep holes (one much lower).  Chuck and I both thought of my mother when we saw the lower one.  We took a picture demonstrating what she would look like if she tried to use the lower peep hole: 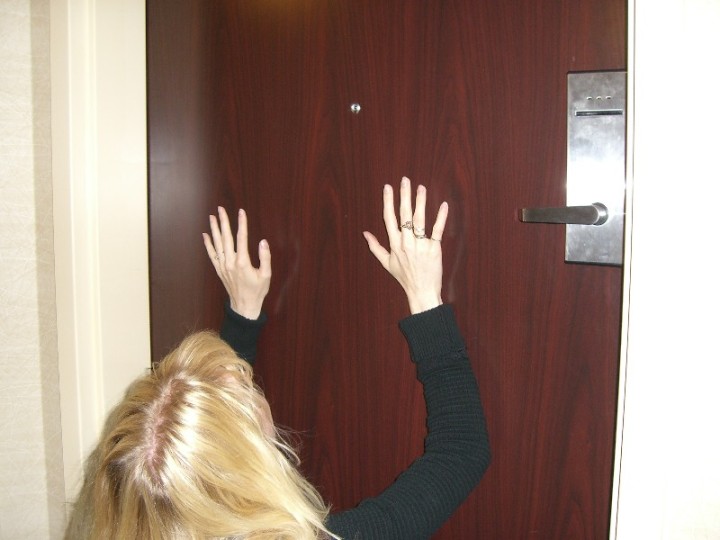 I am so glad I’m in another country, because my mother would kill me if she read this while in range of my butt!  I love you, mother!  Just think, I’ve been shopping all day and I’ve only bought YOU some magazines and deoderant!

Today’s symptoms: I had to take an Alertec to wake me up a bit around 2:00.  After resting a bit at the motel then having suppies, I feel a little better.  I’m going to get a good sleep tonight so I’m all fresh for tomorrow!